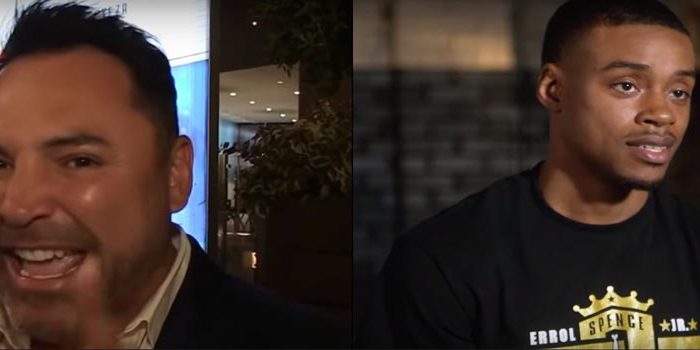 Last Saturday, Spence shut out previously-unbeaten, four-division world titlist Mikey Garcia in front of 47,525 at AT&T Stadium in Arlington, Texas in a Premier Boxing Champions on FOX PPV. The sterling performance caught the eye of many, including De La Hoya who Tweeted:

@ErrolSpenceJr Congratulations on your victory, If you want to make real money, let me promote your next fight on @DAZN_USA.

Signing Spence would change that equation. The former 2012 U.S. Olympian is now 25-0 (21 KOs) as a pro, and his star power is growing. Spence promotes himself through his Man Down Promotions, and is advised by manager Al Haymon who, through his PBC television series, boasts a clientele which, along with Spence, includes Deontay Wilder, Manny Pacquiao, Keith Thurman, Shawn Porter, Danny Garcia, Mikey Garcia, Abner Mares, Leo Santa Cruz, Gary Russell Jr., Luis Ortiz, and more of the sport’s biggest American names.

However, Spence had this to say to Oscar’s Tweet:

Spence’s commentary stems from multiple factors. A 2017 investigative report exposed the efforts made by Golden Boy Promotions to have excluded from the case a chain of 15 emails exchanged between their publicist, Ramiro Gonzalez, and boxing writer Hesiquio Balderas. These emails discussed Haymon, and African-American, and how to use the media to degrade and downplay Haymon’s accomplishments. Haymon, who is responsible for Floyd Mayweather’s meteoric rise, also brought boxing back to network television, something which hasn’t occurred since the sport’s peak days in America.

In one email, Haymon is referred to as a “Black Hitler.” Two other emails called him a “n*gger.” The publicist was never condemned by De La Hoya or his company. Further, during his fighting days, De La Hoya once claimed that African-Americans have no heart and cannot take his body punches. Finally, Spence’s comments speak to issues that Black fighters who have fought on Golden Boy complained about.

De La Hoya has since deleted his initial Tweet.