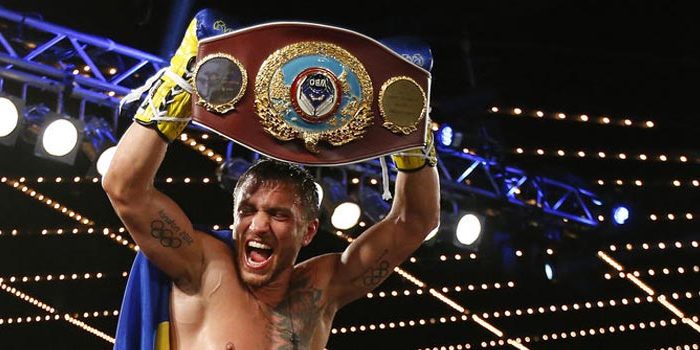 Lomachenko will defend his world titles in the main event against Anthony “Million Dollar’ Crolla on April 12 at 11 p.m. ET/8 p.m. PT on ESPN+.

After this fight, where Lomachenko is beyond a massive favorite, he hopes to face IBF lightweight champion Richard Commey. They were initially targeted for the April date, but Commey suffered an injury and withdrew from the bout.

The goal is to unify the entire lightweight division – and then potentially drop back to super featherweight, where Lomachenko has already been a world champion.

“Right now, I am a lightweight, but lightweight is not my ideal weight category. My goal now is to unify all four titles, and then, we’ll see. Maybe I’ll move back down to 130 pounds and win world titles there for a second time,” Lomachenko said.

As far as his fight against Crolla, Lomachenko admits that he really doesn’t know much about the British boxer outside of his two meetings with Jorge Linares, who Loma knocked out last May.

“I don’t know too much about him. I know him from his two fights with Jorge Linares. I do know he is an aggressive fighter, and I like to fight guys who come forward,” Lomachenko said.

“I want to fight the best. But now, Crolla is the best choice. He is the mandatory challenger and wanted to fight me. That is why I accepted this fight. I don’t know. I can’t see in the future. It depends how he fights. We’ll see.

“I prepare like always. We are training hard. I’ve been training for a couple months already and will put on a great performance for my fans in Los Angeles and on ESPN+. I will show everyone my best style and hope everyone enjoys it.”