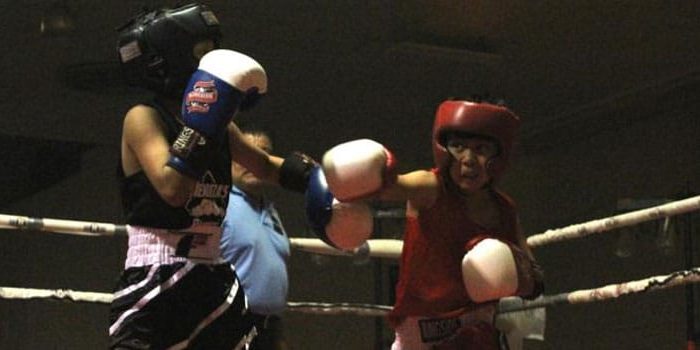 Hope and opportunity were the themes Saturday night as a number of amateur boxers from West Texas stepped into the ring to compete in the 76th Golden Gloves Championships at the Downtown Lions Club in Midland.

The long-term goal is simple: work your way up the ranks to compete in the state tournament in Fort Worth.

After the 12 bouts completed, tournament organizer David Rodriquez came away with a good impression of the fighters coming up.

“We had some real good bouts with kids that had some experience and some newcomers who impressed,” Rodriquez said. “Those guys are the future and ones that I can hopefully take to Fort Worth in a couple of years.”

There were a number of solid bouts on the card but the two standouts occurred toward the end of the night.

The first of those fights came in the 165-pound fight between Kevin Chavez of Midland and Jesse Franco of Odessa.

In a close three-round bout, Franco was initially declared the winner by split decision.

As both fighters were exiting the ring for their post-fight medical exam, they were called back into the ring where Chavez was declared the winner after a scorekeeping error.

“Those things just happen sometimes,” Chavez said. “When they announced the decision at first, I was disappointed that I didn’t win.

“When they called us back up, I thought they were going to give us an award or something for the fight of the night.”

Even with the shift in results, there was still plenty of mutual respect for each other.

“That third round felt like it lasted forever,” Chavez said. “I was just trying to hang in there because Jesse is a good fighter.”

The other dramatic finish came during the final bout of the evening, a 190-pound battle between David Franco of Odessa and Robert Gonzales of Lubbock.

That fight was ended prior to the start of the third round after Franco had suffered an eye injury and the ringside doctor made the call that he couldn’t continue.

“You would rather stop one bout too quick and not too late,” Rodriquez said. “It’s for the safety of the athletes and the doctor has the final say-so on that.”

Even with the last fight being cut short, there were still plenty of positives to take away.

It was a chance for fighters to showcase their talents and get ready to make a move to a bigger stage and for several of the first-time fighters, a chance to get valuable experience.

“Fighting in events like this really helps with all the training that I’ve done,” Franco said of his time at Munoz Boxing Club in Odessa. “I just have to work so I can get the next one.”

Ultimately, the fighters took pride in being able to represent their communities as competitors came from as far north as Friona and as far south as Del Rio.

That sense of pride was particularly strong for the fighters from the Permian Basin.

“It means a lot to get that support,” Franco said. “I’m glad that people got to come out and see some great fights.”

“It means everything to have that support,” Chavez said. “We represent the 432 and we definitely have some warriors here in Texas.”