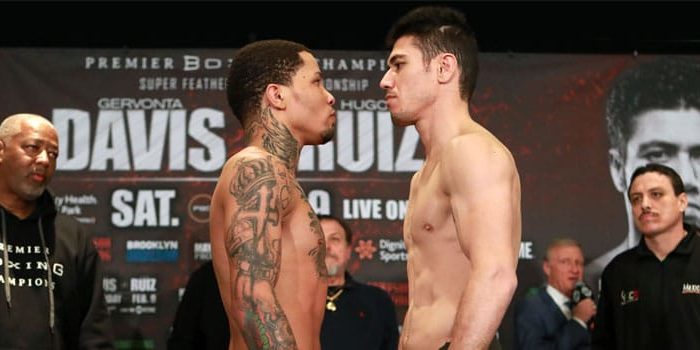 Gervonta Davis gained a lot of weight during his lengthy layoff, but he said he had little difficulty shedding a lot of it once he began training.

The unbeaten champion from Baltimore still needed to step on the California State Athletic Commission’s scale three times Friday to make weight for his title defense Saturday night. Davis eventually met his contractual obligation when he officially weighed in at 129.8 pounds, slightly less than the super featherweight limit of 130 pounds.

He was then given 30 minutes by the CSAC to come back to its scale on weight.

Davis said after the weigh-in that the scale he used in his hotel room was slightly off. Here are the final weights:

* — Davis initially weighed in at 130.2 pounds.  He came back within the allotted time frame one hour later and made weight at 129.8 pounds.

“I was in New York for the Thurman fight about three weeks ago and got off track a little bit. I was heavy there, but once I got back into the groove and back to training it was fine. I feel fine. Making 130 is not a problem. It’s not a distraction. I feel fine. I’m not dehydrated and my face isn’t sunken. I’ll be ready to go tomorrow.”

“It’s kind of expected. He’s missed weight before, so it’s not surprising. I feel great at this weight of 130 pounds. This is the weight I want to be at. I’d fight every month if I could.”

“the meaning of this fight is to keep showcasing my talents and to represent my city of San Antonio. Of course Zamora is dangerous, but come Saturday night I’ll be more dangerous.

If it were up to me I’d be fighting for a world title tomorrow night.”

“I’m not looking for the knockout. If it comes, it comes. If it doesn’t come, then I’ll take it by decision.”