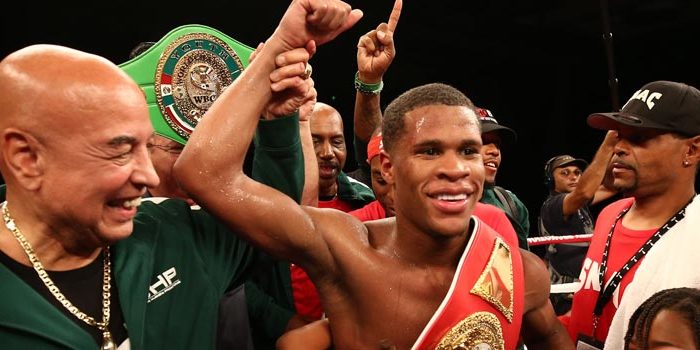 Devin Haney will face an undefeated fighter for just the second time in his three-year pro career January 11. Multiple sources have informed BoxingScene.com that Haney, one of boxing’s top prospects, will square off against Xolisani Ndongeni in the main event of a “ShoBox: The New Generation” telecast that night.

The site deal for the card headlined by Haney and Ndongeni hasn’t been finalized, but the venue will be announced soon.

Las Vegas’ Haney, who turned 20 on Saturday, has agreed to box a 28-year-old opponent who has produced a 25-0 record, including 13 knockouts. South Africa’s Ndongeni has fought almost exclusively in his home country since making his pro debut in May 2010.

Ndongeni hasn’t beaten a formidable lightweight contender, yet still could represent a slight step up in class for the unusually talented Haney (20-0, 13 KOs).

Haney has beaten Mason Menard and Juan Carlos Burgos in his past two fights, each of which was considered an incremental improvement in opposition for him.

Before Haney defeated him, Burgos hadn’t lost since Mikey Garcia beat him by unanimous decision in a January 2014 bout in The Theater at Madison Square Garden in New York.

Burgos had only fought three times between boxing Garcia (39-0, 30 KOs) and Haney, however, and was most successful as a featherweight, two divisions below the weight at which he lost to Haney.

Haney didn’t become the first fighter to knock out the Mexican veteran, but beat Burgos convincingly. Haney won all 10 rounds on two scorecards (100-90) and one judge scored seven of their 10 rounds for him (97-93).