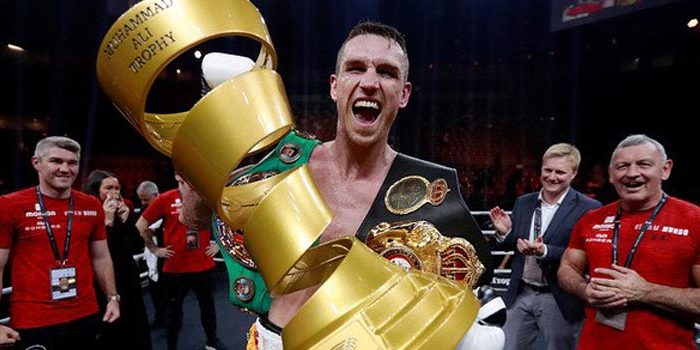 Smith floored Groves with 1:11 to go in the seventh round after landing a right uppercut and Groves couldn’t get up before referee Luis Pabon counted to 10.

Smith (25-0, 18 KOs), of Liverpool, England, also won the WBA 168-pound championship from Groves, The Ring magazine’s super middleweight title and the Muhammad Ali trophy, presented to the winners of each WBSS tournament. London’s Groves (28-4, 20 KOs) lost by knockout for the third time in his career.

“It’s been a long time coming,” Smith said, “and there’s times when you think, ‘I’ve waited this long for chance. If I don’t take it, when will another one come?’ … I’ve said for a long time I’m a big believer in me own abilities. I know how good I am and I knew I’m good enough to become a world champion and become the best on the planet, and I believe I’ve done that.

“And I think I had a slow couple years and I think people kind of forgot me, forgot how good I was. And I just kept believing. I think tonight I reminded people how good I am.”

Groves landed two right hands to Smith’s body just before the fight completely changed just prior after the midway point of the seventh round. Smith came back and landed a left hook that made Groves stumble backward, into a corner.

Smith seized his opportunity to finish Groves by landing a hard right to the body and the aforementioned right uppercut that sent Groves to the canvas. A demoralized Groves got to one knee, but with blood flowing from a cut over his right, shook his head and didn’t attempt to get up as Pabon finished his count.

“It was a good fight,” Smith said. “I’d have to go back and watch it, but I felt like I was ahead at the time of the stoppage. I was more pleased because I feel I was beating him at his own game, in a boxing match at a distance and using our brains, and I felt I was winning. That’s what people thought I couldn’t cope with him at … I always knew I had the power to finish him, but I showed that [I have] a little bit of boxing ability as well.”

The 28-year-old Smith proved himself against the toughest opponent of his six-year pro career in this high-stakes bout at King Abdullah’s Sports City. Before facing Smith, the 30-year-old Groves had faced a much higher level of opposition – including two knockout defeats to Carl Froch and a split-decision loss to Badou Jack.

Before Smith knocked Groves out at 2:04 of the seventh round, their scheduled 12-round fight was competitive.

With Groves backed against the ropes, Smith connected with two jolting jabs just before the halfway point of the sixth round. Smith also landed a flush left hook later in the sixth that made Groves move away from him.

There wasn’t as much clean punching in the fifth round as in the previous rounds. Smith went down with just over 20 seconds to go in the fifth round, but that trip to the canvas happened when their legs got tangled.

After two tactical rounds to start the fight, Groves and Smith provided terrific back-and-forth action in the third round. Smith seemed to hurt Groves when he buckled Groves’ knees with a counter right hand.

Smith tried to capitalize on buzzing Groves, but a determined Groves fended off Smith by hitting him with a right hand to the body and a left hook. That backed up Smith and gave Groves the space that he needed to recover.

Smith drilled Groves with a straight right hand and then a stiff jab just before the midway mark of the second round. Groves landed several jabs of his own in the second round, when he also did a better job of blocking and dodging Smith’s right hand.

Smith came back toward the end of the first to connect with an overhand right to the side of Groves’ head. Smith also landed a left hook and a right hand a few seconds before the first round ended.

Their fight Friday night marked the culmination of a three-round, 168-pound WBSS tournament that lasted a year.

Groves and Smith tentatively were scheduled to fight June 2 at O2 Arena in London, but Groves’ shoulder injury, suffered during his victory over Chris Eubank Jr. in the semifinals February 17, forced a three-plus month postponement. Groves said his surgically repaired left shoulder felt fine Friday night and wasn’t a factor in losing to Smith.

“It felt all right,” Groves said. “It was flying out there. It was lightning-fast in the changing room. I’m not here to make excuses. The shoulder worked. Callum, as I say, to his credit, he was the better man on the night. I can only be honest. Full credit to him.”