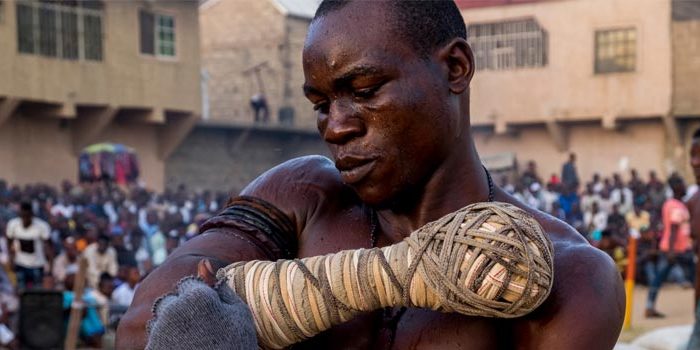 KANO, Nigeria — Tijjani Zakari stepped into a dusty boxing ring in northern Nigeria and wound thick, threaded cord around his right fist and forearm. For this fighter, the wrap was more battering ram than padded glove.

Zakari squared up to his opponent, squatting low with his bound arm cocked at his side. Less than a minute after the opening whistle, he landed an echoing blow that floored his opponent. A thousand spectators roared. He had won.

This is dambe, a generations-old West African style of boxing originally practiced by the Hausa people. It is making a comeback in Nigeria.

Two groups are cultivating this fighting style, with the hope of taking it abroad. One is a grass-roots league of dambe clubs, called the Nigeria Traditional Boxing League Association. The other, Dambe Warriors, promotes the sport online and in live events.

The groups are taking different approaches, but both face the difficulty of preserving dambe’s traditions while appealing to a wide audience and reckoning with the sport’s brutality.

“This is a long journey,” Faruk Bello, the league’s president and one of its founders, said, “but we are so determined.”

In dambe, a boxer wraps his stronger arm in cord for striking, the “spear.” He uses the other arm for defense, the “shield.” The goal is to knock over an opponent within three rounds.

With roots in military practices, dambe grew into an event to celebrate harvests, naming ceremonies and funerals, said Aliyu Muhammad Bunza, a professor in the department of languages and culture at Federal University Gusau in Nigeria. Boxers fought for fame, representing their towns and fighting clans.

Today, a patchwork of dambe associations hosts weekly fights for entertainment across the country, but the sport is most popular in the north.

With its popularity have come questions about its safety.

Some believe dambe is too dangerous in any form. Split brows, broken noses, smashed teeth and knockouts are common. The destruction is written in scars on the faces of fighters who have spent years in the ring.

“It’s too brutal,” Femi Babafemi, an amateur boxing coach, said. “Those that are doing it are really endangering their lives.”

Still, dambe has become a full-time job for many fighters. Fans, ring owners and wealthy patrons support their favorite fighters. One established boxer, Auta Nafiu Abdullah, who has fought for seven years, said he earned, on average, about 100,000 Nigerian naira, or about $275, a month.

The fights are frenetic and perilous.

Boxers gather in fighting clans around a sand pit, taunting rivals and breaking suddenly into combat. Today, they head-butt and kick as well as punch. All the while, singers and drummers play mesmeric songs to embolden fighters.

Bello, who started watching dambe 40 years ago, said he started the league in 2017 with fellow enthusiasts because he had grown fed up with what he saw as the declining quality of the sport.

The league founded six clubs and designed a season of weekend tournaments in which teams pit their best boxers against one an other.

Playing for a club appealed to Garkuwa Maichaga, who followed his brother into dambe at age 10. He joined the league after more than 20 years of navigating the dambe circuit alone, which he described as tiring and expensive.

Along with a regular season, the league drafted a complete set of rules. It consulted with historians, fighters and fans to codify generations of tradition while introducing new regulations to rein in the sport’s wilder tendencies.

The league standardized uniforms, limited rounds to three minutes, created a system for scoring fights and even included a code of conduct for spectators that threatens rowdy fans with a red card and expulsion.

“We want one day to have a conventional dambe whereby all countries of the world will be participating,” Bello said.

Four new clubs joined the original six in the second season. And the league reached out to groups in Niger to establish ties across the region.

“From Africa and on to the West,” Bello said. He believes that with the right support, dambe will make the leap from regional martial art to Olympic sport. And he dreams of one day taking an exhibition fight to Las Vegas.

But to create broad appeal, the league is gradually banning some customs that may prove difficult to export.

For example, fighters wear amulets for protection and intimidation. They also rub a herbal mixture into rows of half-inch incisions cut up and down their arms, believing it to strengthen punches.

For added safety, the league hired a doctor to monitor fights. It is reaching out to sportswear manufactures to create a glove that mimics the traditional hand wraps, only without the flesh-tearing cords. Weight categories will be added next season. So will health insurance and ambulance support, if the league can bring in more money.

Without sponsorships, the league relies on selling tickets — usually less than 500 naira, or about $1.40, each — to fund the clubs. And its board members work day jobs to help finance operations.

The pair behind Dambe Warriors, Chidi Anyina and Anthony Okeleke, share the same passion for growing the sport but see it as both an athletic pursuit and a spectacle. Drawing on their media and digital backgrounds, they promote dambe through YouTube and live events, while recasting it for a modern audience. The vision is to become “the U.F.C. of Africa,” Okeleke said, referring to the Ultimate Fighting Championship.

Today, the pair’s YouTube channel’s 21 videos have racked up 13 million views and more than 50,000 subscribers. The data revealed that more than 90 percent of the views came from overseas, mainly the United States, Brazil, Indonesia, India and the Philippines.

To build a local audience, the pair hosted a fight in March on a beach in an upscale neighborhood of Lagos, Nigeria’s commercial hub. They wanted to catch the attention of the city’s upwardly mobile and bring the sport into the south from its historic home in the north.

This was also a chance to put their own spin on dambe, Anyina said, “to elevate it.”

They hosted a second fight in Lagos in June and are planning to tour the north. Once they “own it” in Nigeria, they will use data from YouTube to choose the best destination for their first overseas event.

Some who box the traditional way, with padded gloves and in a ring, find dambe too brutal. But new rules are meant to reduce blood and broken bones.CreditMark Rivett-Carnac

But as they look abroad, they are encountering a problem similar to the one facing Bello and the league. “We are having to battle between keeping that whole traditional essence of the game of dambe and selling it to a global audience,” Anyina said. “It’s not like we have easy answers.”

They are determined to preserve the spectacle of dambe — the sand, the hand wraps and the way boxers spray mouthfuls of water on each other to cool off — but believe adding a clearer scoring system and fight schedule will help outsiders engage.

Jirgi Bahago, a boxer who has fought for 15 years, said that since the Lagos event, he had received more calls to compete than ever before. And Aminu Kaura Goje, owner of a dambe ring where Anyina and Okeleke have filmed fights, said the pair had introduced a new audience to the sport by putting it online.

The sport is still teeming with potential, Anyina and Okeleke said, listing opportunities that they are pursuing, including broadcast deals, brand partnerships, merchandising and documentaries.