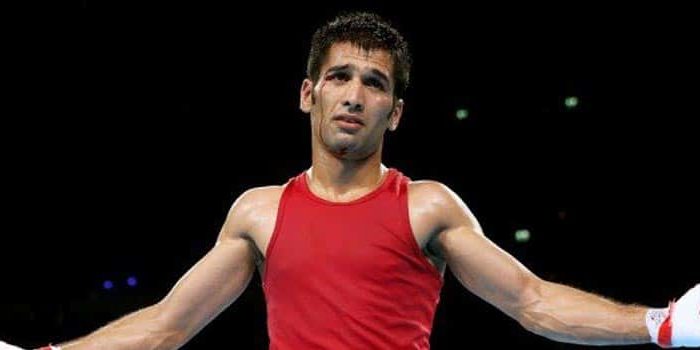 He has about 40 days left to prepare for the International Boxing Federation World title.

Earlier this year, Waseem was stripped off his WBC title for a lack of title bout and sponsors while his new goal for the IBF title has brought him to Las Vegas again. He is set to fight South Africa’s Motuti Mthalane in Kuala Lampur next month for which he’s joined the Floyd Mayweather’s gym to make sure he is in top form.

“It is like starting from the scratch now,” explains Waseem who was last seen at a bout in against a local boxer Jose Luis Calvo in August that he won on knock out.

“Time flies and I know I have to get on track and my dream remains the same, that I have to win a world title. Unfortunately I missed out on the opportunity on the WBC title, but I’m not letting those things stop me.”

He continued, “I’m told I’m aiming high, and when I tell people here in Vegas that I’m looking for a world title, they get amazed at it, because usually most boxers go for it after more than 20 fights, but I’ve already wasted so much time.”

The 30-year-old began his professional career in 2015 after being disheartened by the apathy of the Pakistan Boxing Federation (PBF), and in limited amount of time, Waseem has an impeccable career with eight bouts to his name, all wins including five knock-outs.

This year he was looking to take on Japan’s WBC Flyweight Champion Daigo Higa but Waseem’s manager explained that he did not have the money which is why the fight could not take place.

Due to lack of proper facilities and funds, Waseem suffered from difficult time training in his home country but things changed and now he’s training with Jeff Mayweather to reach his top level by July 15.

Waseem believes, that over Mthalane, it is his amateur career that will help. However, it is the ring-time that matters.

Mthalane has 37 pro fights under his belt compared to Waseem.

“I’m training as hard as I can, and it is not easy after that long break, at the same time I want to maintain my undefeated record,” said Waseem. ”

30-year-old added, “But I have more fights if I include my amateur days, more than 300 and I feel that would help me, no one can take away that kind of experience and it will serve me even if I started my professional career later. My focus is on that title.”

The 2010 World Combat Games gold medallist believes that it is the need of better sparring partners that brought him to the US, while most fellow boxers are amazed as he continues to fast while training during the month of Ramazan.

“The faith helps, in fact I do my sparring and tough work in the morning,” explained Waseem. “It does surprise my coaches and other boxers but that is something that helps me, my faith, it only gets harder, yes, but that is a training of sorts too, to push myself as far as I can. I’m training in two sessions per day.”

He continued, “Of course others are concerned that I’m not hydrating myself or exhausting myself, but I’m careful during Ramazan. However, I wouldn’t skip my fasts. It is also a part of the training for me. When they see me like this they call me a beast.”

Waseem added that many boxers are happy to see him back at training in Vegas and sparring partners available there are giving him tough time. Meanwhile Waseem’s goal is to have more than 100 rounds of sparring before the fight. He is not even thinking about how Mthalane would be preparing.

“I know I can win if I make sure I’ve put in my best in the preparation. I’m sure Mthalane would be preparing too, but I can’t be thinking about him,” said Waseem.

“I need more than 100 rounds of sparring that is my target. In fact, 200 rounds if I can so that I can fight for 12 rounds on the big day. Boxing is not easy, and this is a do-or-die for me. Boxing pushes you to get out of all kinds of comfort zones and work hard.”