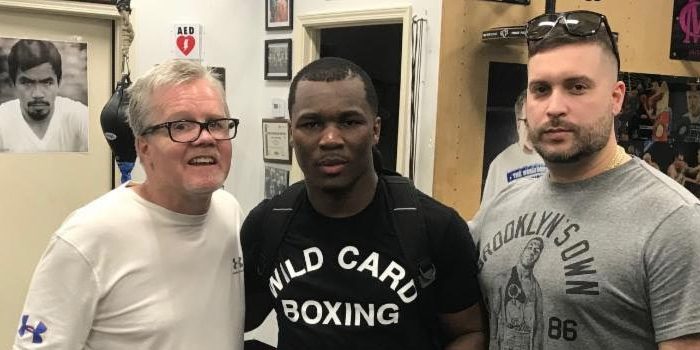 PROVIDENCE, RI – World-rated featherweight Toka “T Nice” Kahn-Clary (24-1, 17 KOs) has graduated from prospect to world contender. To fully develop, Kahn-Clary recently shifted his training camp from the smallest state in the country, Rhode Island, to the second-largest city in America, Los Angeles, where he has started working with Hall of Fame trainer Freddie Roach.

Fighting out of Providence (RI), Kahn-Clary made the six-week move to Roach’s famed Wild Card Boxing Club to receive fine tuning from Roach, avoid any potential distractions at home, and have an opportunity for world-class sparring sessions.

The chemistry was there right away between Roach and Kahn-Clary. After his first day working with Kahn-Clary, Roach said the following: “Today was a very good day. Toka has great ring-generalship, footwork and speed. I was impressed.”

“Freddie is very precise,” Kahn-Clary reported after a few days with New England native Roach. “Sometimes I get a little lazy on the ropes. No, no, not with him. I wanted to prove right away that I listen. We were working on the pads and Freddie said, ‘You’re not as dumb as you look.’ I thought that was cool coming from him and took it as a compliment. He’s working on me being in total control in the ring.   I’m not really going to learn anything too new from him, but it always helps to add a new move here and there. He saw that I’m fast and work the angles. He’s not changing my style, just sharpening my tools.

“When there is sparring, the gym is packed with fighters from 122 pounds up to heavyweight. Not just two or three, but a whole lot of guys, and the competition between everyone is great We’re working on my next opponent. Right now, I’m just preparing for my next fight, and then we can focus on my opponent when we know who that will be.”

Toka-Kahn’s remarkable life story started in his native Liberia, where he knew very little about his real mother as a child, or how many siblings he has in his family. When his father moved to the United States and in 1998, six-year-old Toka Kahn and his younger sister joined him there in Philadelphia.

His father, though, was later shot to death, leaving Toka and his sister alone. In 2000, they moved to Providence (RI) to live with a family that, frankly, didn’t really care what happened to them. All signs led to him falling in with the wrong crowd and getting into serious trouble. He was homeless for a while but, fortunately, he found boxing and that became his salvation.

No matter the weather, including snow and freezing conditions, Toka always rode his bike seven miles each way to the gym from his residence, which didn’t even have electricity. He never told anybody, never complained. One day, Andrea told the quiet, private kid in the gym that Christmas was coming, and she had a present for him – an extra bedroom. He was adopted and proudly changed his name to Toka Kahn-Clary.

Kahn-Clary arrived in LA on April 16 and he will remain there until May 25. “At this point in his career,” Toka’s manager Seth DeRobbio explained, “he had to make this move to position himself for a world title shot. There’s no quality sparring in New England in his weight class. Freddie is one of the best, if not the best trainer in boxing. Toka is going to benefit from working with Freddie. No distractions out there, either. Toka is going to eat, sleep, wake-up, run, strength train and box. That’s it, all boxing, 24/7.”

“I was involved in this decision and I’ve worked with Freddie before (with Peter Manfredo, Jr.),” Manfredo, Sr. remarked. “It is the right move to advance his career. Toka is probably the best fighter I’ve ever trained. He’ll be away from distractions at home and get quality sparring. Freddie is a top-notch trainer, who I have nothing but admiration and respect for. Freddie will teach him more and we work well together. He’s so knowledgeable and a great guy, too. Freddie is a teacher and I’ll learn more as well.”

Kahn-Clary recently became a father for the first time, but he understands the sacrifice he’s making for his pro boxing career will payoff sooner rather than alter for his family.

“I talk to my daughter every day,” the affable Kahn-Clary concluded. “Thank God for technology. I facetime because she’s five months old and I don’t want her to forget my face. I don’t know how fighters used to go away to camp.”

The 25-year-old Kahn-Clary is world rated by the International Boxing Federation (#11) and World Boxing Federation (#13). In his last two fights, Kahn-Clary defeated a pair of undefeated opponents, David Berna (13-0) by way of a second-round technical knockout in Louisville (KY for the interim North American Boxing Association (NABA) featherweight title, adding the NABA USNBC featherweight crown to his growing display case this past December, when John Vincent Moralde (19-0) was unable to continue after seven rounds of punishment in Providence.