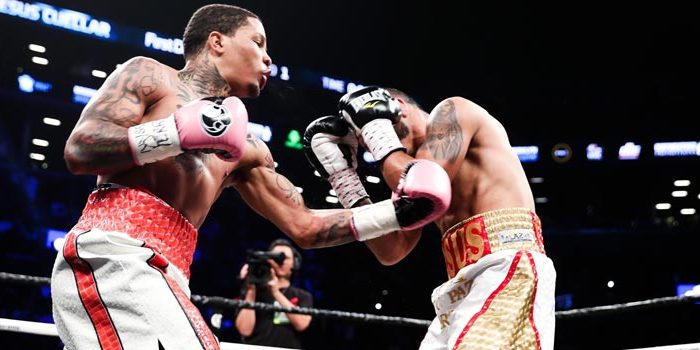 Gervonta Davis became a two-time world champion in empathic fashion with a third round TKO of former champion Jesus Cuellar to capture the vacant WBA 130-pound World Championship.
VIDEO:https://s.sho.com/2vusWsW
The undefeated Davis (20-0, 19 KOs), who lost the IBF 130-pound title on the scales last August, scored three knockdowns in less than three rounds to win his second title in the super featherweight division. The 23-year-old connected on 49 percent of his power shots in his first bout with new trainer Kevin Cunningham.
“On the undercard of the Mayweather-McGregor fight, I just wasn’t focused,” Davis said. “It was the second time fighting on Mayweather’s card so it got to my head and it showed. After the fight, I went home and talked to my team and we decided it was time to leave Baltimore. I’m focused and it showed because I’m a champ again.
“There’s always bumps in the road when you want to become successful. It’s all about how you bounce back and tonight I showed that I’m a true champion.”
Davis utilized a combination of body shots, uppercuts and effective counterpunching to break down Cuellar, a former titlist at 126-pounds. Baltimore’s Davis floored Cuellar with a body blow in the second round and didn’t relent from there. The southpaw pressed forward in the third, stalking Cuellar against the ropes and sending him down for the second time with a series of combinations. Cuellar (28-3, 21 KOs) got up, but was in serious trouble and referee Benjy Esteves stepped in to halt the contest at 2:45with the Argentine falling to the canvas for the third time.
“The game plan was to box a little bit and open him up with some shots,” Davis said. “When it was time, I went forward and caught him with enough shots to get him out.
“I want the IBF belt back and I’m ready to unify it with whoever wins the [Tevin] Farmer vs. [Billy] Dib fight.”
On Saturday’s telecast, it was announced that Errol Spence Jr. will make the second defense of his IBF Welterweight World Championship against undefeated mandatory challenger Carlos Ocampo June 16 on SHOWTIME in a homecoming fight in Dallas.
Saturday’s SHOWTIME CHAMPIONSHIP BOXING tripleheader will replay on Mondayat 10 p.m. ET/PT on SHOWTIME EXTREME.