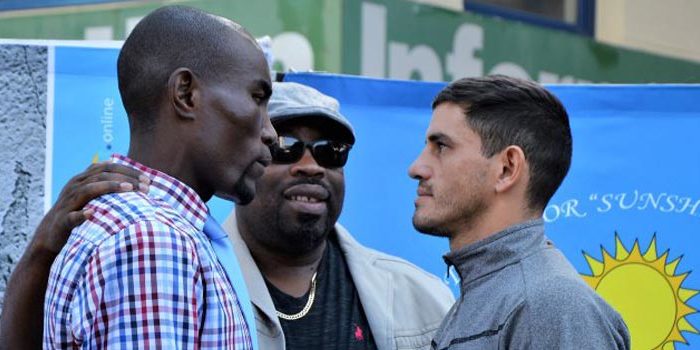 As Independence Day nears, several important activities are planned in beautiful Namibia. One of them is a major and unique boxing card that takes place at The Ramatex in Windhoek, capital of the country. The 14-bout show will be headlined by unbeaten middleweight craftsman Walter Kautondokwa who will take on Argentinian Billi Facundo Godoy in a scheduled 12-rounder.

The Windhoek-based Kautondokwa (16-0, 15 KO) is the reigning WBO Africa champ at 160 pounds where he also holds a high ranking position by the named sanctioning organization at No. 3.

The 31-year-old Godoy (36-4, 17 KO) enjoys a sizeable advantage in experience as he easily doubles up his Namibian opponent in number of fights in the pro ranks as well as in quality of opposition. The Argentinian’s best wins came against over-the-hill former champion Carlos Manuel Baldomir and up-and-coming Jorge Sebastian Heiland in distance fights in 2012.

Kautondokwa, however, brings in power and athleticism next to his hometown advantage that makes this a fascinating matchup.

The highly celebrated event, that takes place on an unusual Tuesday on March 20 to be the closest to the official celebration day a day later, is set to be remembered as Namibian promoter, Nestor Tobias managed to bring in three of the presidents the country had through its 28 years of independence.

On Thursday, the fighters faced off for the first time on a podium in the center of Windhoek. Hundreds of spectators were gathered to witness the ceremony that saw most of the boxers at the show posing for cameras.

“I would like to welcome Godoy in Namibia and tell him Tuesday will be a great night. I don’t know about him that much, I checked some of his fights on YouTube. He is a good, experienced guy but I will do my best as always. I don’t underestimate my opponent because I know he came to fight and win, so I am ready to go twelve rounds,” said Kautondokwa to a group of reporters.

“This fight means a lot to me because this is a legacy fight; fighting for the current and former presidents of the Republic of Namibia. It is really important for me to win this fight because I cannot disappoint my presidents.”

“[Kautondokwa] looks fit and strong like I expected. Though I am not tall for the class, I have always fought in this division, so I am not worried about his height advantage. I have fought very experienced boxers, and I am confident because he has never fought someone like me. I don’t know if it would be on points or stoppage, all I can guarantee is it will be a great fight,” said Godoy, who arrived in the country on Tuesday, a week before the fight.

The fighters also had an appointment with the parliamentarians where they got introduced by the speaker of the national assembly on Thursday afternoon.

The event is promoted by Nestor Tobias’s MTC Sunshine Productions and televised live on Namibian TV.