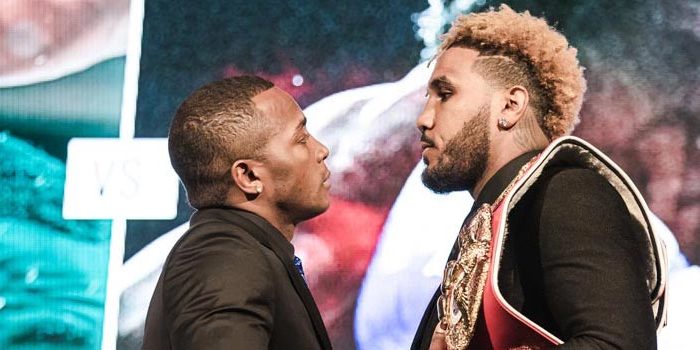 In the co-main event, Super Middleweight World Champion Caleb Truax will make the first defense of his IBF title against James DeGale in a rematch of one of the biggest upsets of 2017 that saw Truax wrestle the belt from DeGale on his home turf in London last December.

Tickets for the show, which is promoted by TGB Promotions and Mayweather Promotions, will go on sale Friday, March 16 and be available by visiting AXS.com or the Hard Rock Hotel & Casino, Las Vegas Box Office.

“This is an action-packed card from top to bottom. The televised card features boxers who all have something significant to gain with a victory,’’ said Tom Brown, President of TGB Promotions. “The winner of Lara-Hurd will be one step closer to becoming the undisputed 154-pound world champion. In a rematch, Truax gets to re-affirm his position as champion and DeGale has a chance to regain his world championship status. This is the kind of show that keeps fans on the edge of their seats.’’

“We take pride in promoting quality events that our audiences always want to see,” said Leonard Ellerbe, CEO of Mayweather Promotions. “This card is going to be another line-up that the fans won’t want to miss. With Lara and Hurd looking to unify their titles and guys going head-to-head in rematches on the undercard, this is sure to be a night of non-stop action.

Lara vs. Hurd is a classic contrast in styles that could force each fighter to raise their game to another level. Lara is a crafty southpaw who relies on his superior boxing skills to confound opponents, while Hurd is a pure pressure boxer-puncher that stalks his opponents and isn’t easily frustrated.

Lara, a Cuban whose nickname is “The American Dream’’, is coming off a unanimous decision victory on SHOWTIME over Terrell Gausha in October. Hurd was on the same card and defeated former champion Austin Trout when Trout’s corner stopped the fight in the 10th round. That paved the way for this unification showdown.

The 34-year-old Lara (25-2-2, 14 KOs), who lives and trains in Houston, Texas, won his world title with a TKO victory over Alfredo Angulo in 2013 and has successfully defended it seven times, which includes wins over Trout, Ishe Smith and Vanes Martirosyan.

“I’m very excited and motivated for this fight and to once again be headlining on the best network in boxing on SHOWTIME, is truly a pleasure,’’ said Lara.  “I look forward to adding another belt to my collection on April 7 and to proving that I’m the best 154-pound fighter out there. Everyone tune-in because you don’t want to miss this unification. It’s going to be a legendary night and one for the history books.”

The undefeated Hurd (21-0, 15 KOs) is coming off a career-defining TKO victory over the former champion Trout in his last fight on Oct. 14. It was the first defense of the title for the 27-year Hurd of Accokeek, Maryland, who won the championship with a TKO victory over Tony Harrison on Feb. 25, 2017.

“I plan on being the aggressor for the entire fight, so I’ve been doing some exercises and working on techniques to improve my foot work so that I can stay on top of Erislandy Lara,’’ said Hurd. “We are not trying to go to the scorecards, so hopefully, I can be the first man to stop him, which I hope to do in the later rounds.

“I called him out, and now, it has come to pass that I get to become a unified champion against the man everyone considers to be the best and most feared in the division, and that’s Erislandy Lara.”

They call 34-year-old Truax “Golden’’, and he punched his ticket to world title gold while on a trip to London in December, when he defeated DeGale by majority decision. Truax (29-3-2, 18 KOs) of Osseo, Minnesota was on a two-fight win streak heading into the match against DeGale. Before that his only losses came against former champions Anthony Dirrell, Daniel Jacobs and Jermain Taylor.

“They made the right call on the decision in England, and I expect to be even more dominant this time around,’’ Truax said. “I am planning to really just beat up James Gale and get the job done in more efficient fashion this time.’

The 32-year-old DeGale (23-2-1, 14 KOs) was the first British boxer to win a Gold Medal in the Olympics (2008 Beijing Games) and a world championship as a professional. He won his world title with a unanimous decision over Andre Dirrell in 2015 and made two successful defenses before fighting to a draw against Badou Jack on Jan. 14, 2017. It was a brutal standoff between two world champions, but neither man had his hand raised in victory. DeGale, who was coming off of an injury, had his home town crowd behind him but couldn’t deliver a win as Truax scored a stunning upset with the majority decision victory.

‘I’m happy to have the opportunity to rematch Truax and regain my IBF title,’’ said DeGale. “I am not going to make excuses for my poor performance, actions speak louder than words. I am excited to be boxing in Vegas and on SHOWTIME again. The real JD will be back on fight night!”