“I wouldn’t put my name on something if it wasn’t good,” said Azumah Nelson during the final press conference for Fight Night, Round III. “These are boxers I chose myself and I believe you will see a great fight this weekend.”

Nelson’s words proved to be prophetic. The Oluwaseun Wahab-Abraham Osei Bonsu main event enraptured fight fans in Accra, Ghana’s Bukom Boxing Arena, producing action that would have been considered a Fight of the Year candidate had it occurred on a bigger platform.

Nelson wants to increase that platform size by putting the sport’s spotlight firmly on Accra, a city that has produced more world champions than any other in Africa. It began in June last year when, along with HeMann Promotions, Nelson launched Azumah Nelson’s Fight Night, Round I. This wasn’t your average boxing show.

“The idea was to hold it at a high-end venue and bring awareness of boxing to the corporates and business people of Accra,” says Heta Hema-Mann, head of HeMann Promotions.

The Fight Night series represented a paradigm shift on how the sport was presented to Ghanaians. Previous fights were held at the Accra Sports Stadium, where security was lax at best. Ticketholders often found themselves being harassed and could “lose” their wallet as easily as a boxer could lose a fight. The unfriendly environment kept certain groups away from the venue and, in turn, away from boxing.

With that in mind, the first two Fight Night events were held in Accra’s Kempinski Hotel, a luxury 5-star hotel headquartered in Switzerland.

“We did the Kempinski because we wanted to imbed boxing in Ghana’s finest minds,” Hema-Mann explains. “And to show them that boxing can be an enjoyable experience not only for the husbands, but for the wives as well.”

The Ghana fight scene was transformed to the Las Vegas strip as dignitaries, entrepreneurs and expatriates wore their finest threads to the venue to be served champagne and hors d’ouevres at ringside tables.

It was quite a show, but nothing like the one that occurred in the ring. Nelson and Hema-Mann’s focus isn’t on promoting one single fighter. It’s on promoting all of them. This allows them to provide better matchups instead of showcase bouts featuring one fighter they want to look good.

Azumah isn’t just a figurehead for this boxing series. The International Boxing Hall of Fame inductee has toured gyms all over Ghana, handpicking each fighter for his show after thorough scouting. When the newly-built, high-security, Boxing Bukom Boxing Arena opened last November, Nelson and Hema-Mann saw an opportunity to marry the new followers of the sport with the local, long-time fans.

“The average Ghanaian boxer is struggling to earn a living,” Hema-Mann notes. “Where does he get the opportunity to visit foreign countries and take part in bouts versus international boxers? Azumah and I had the solution.”

In what was a sort of test run, Azumah Nelson’s Fight Night, Round III featured an amateur boxer from Lebanon. The move piqued the interest of Ghana’s sizable and prominent Lebanese populace. Their fighter would lose in grand fashion but those in attendance witnessed the Wahab-Bonsu war that was the talk of the town days after.

The theme? The U.K. versus Ghana.

Only this time, the Gold Coast isn’t at stake—although the pride of the two countries is. One Irishman and three Englishmen will square off against Ghana’s finest. The venue will be packed from rowdy attendees in the upper decks to the elite in the VVIP and VIP sections, where wine and catered food is served. But the real feast is for their eyes.

“Our vision has always been to put Accra at the fore of Africa boxing,” Hema-Mann says. “We’re going to restore boxing’s lost glory in boxing and make Accra the Las Vegas of Africa boxing.” 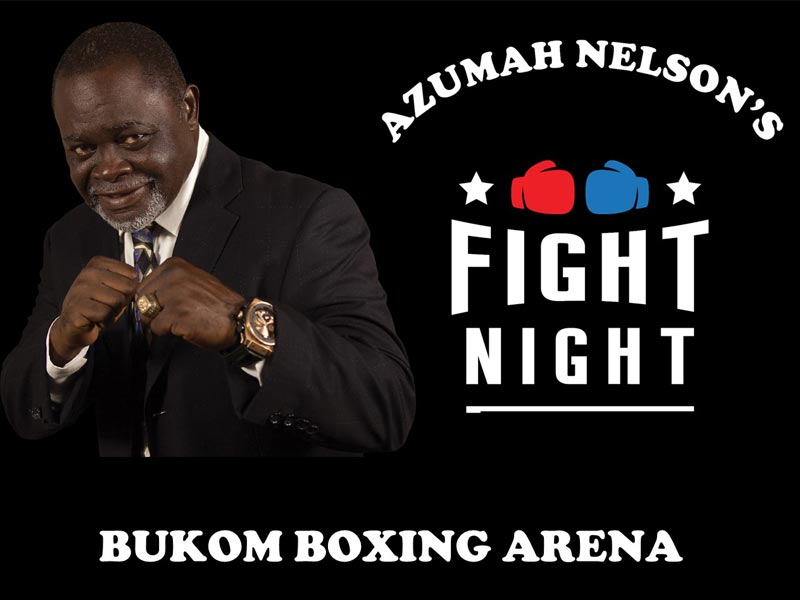