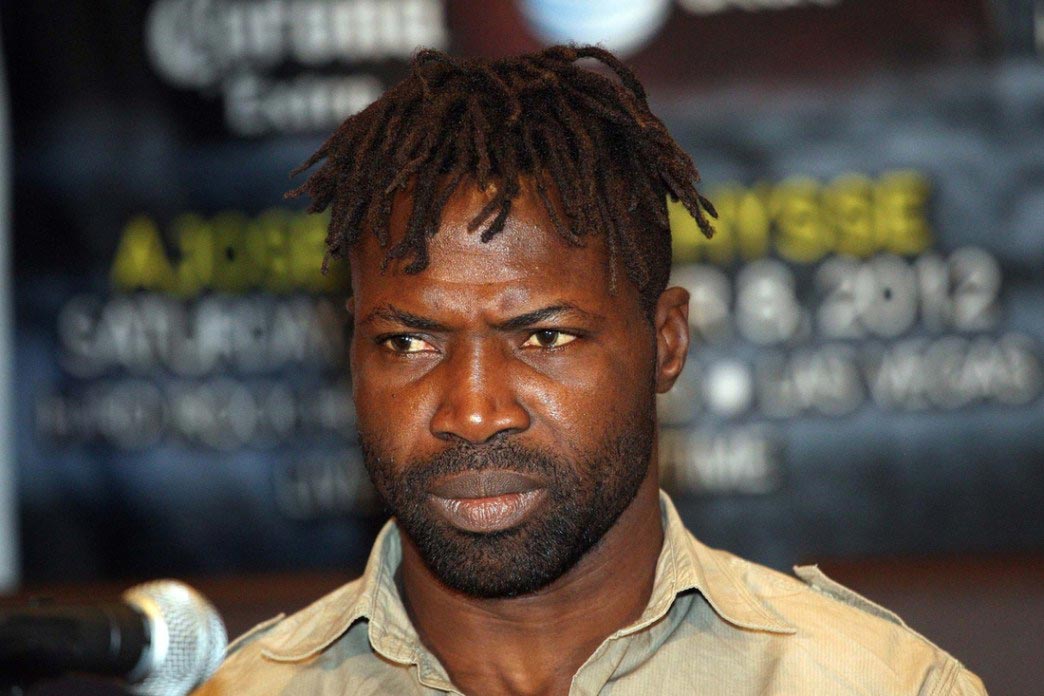 Those who thought Olusegun Ajose drew inspiration from the fact that his father was a boxer and later a coach, got it wrong. In fact, he actually wanted to be a basket baller until he was beaten up by a girl. This led him to the boxing ring. Ajose, who in 2012 lost his bid to win the WBC Light Welterweight title to Argentine Lucas Martin Mattysse has a dream of winning a world title, Kunle Adewale writes

Segun Ajose was born into a family of three  in Shomolu, Lagos, which was popular for producing many boxers like Obisia Nwankpa .

“I really never wanted to be boxer; my ambition was to become a basket-baller when I was a kid despite the fact that my father was a boxer, who later became a coach.

“My dad never planned that I should become a boxer. It was just by accident. I went to the gym one day and I was beaten up by a girl, who happened to be a boxer. I was tricked into having a sparring session with her not knowing that the girl was already into boxing and she beat me to stupor. I cried like a baby. So, two weeks later, I returned to the gym and that was how it all started,” the former Commonwealth Featherweight champion recalled.

At the age of six, Ajose was already a boxer in the making. As a primary school pupil, he would go to the boxing gym to train.

“During weekends, I go to the ring to train. I was doing the same till I got to secondary school. Though, along the line, I was into football too and I almost abandoned boxing for football but my father felt I was better to be a boxer than a footballer. That was how I concentrated all my efforts to boxing,” he noted.

Unlike most mothers who would not want their children to have anything to do with boxing, Segun’s mum would even watch some of his bouts.

Speaking further, he stated, “My mother had no choice because in the African setting, the man rules the home and since my father had given his blessing to my boxing my mother was left with little or no choice. Moreover, she was married to a boxer. She was always coming to watch my fights. When I won the Eagle belt, she was there by the ring side.”

Most athletes always have people they look up to as a child and wish to emulate and Ajose is no exception. In fact he had two people as his role models.

“There were two boxers I was always looking up to. One is a Nigerian, Moses James and the other, an American, Sugar Ray Leonard. James was a terrific boxer and represented Nigeria in many competitions. He won a lot of laurels for the country. He won gold for Nigeria in both the Commonwealth and African Games. He also won bronze at the World Championship. He was under the tutelage of my father for so many years. I really looked up to him and I used to visit him whenever he was in camp in preparation for national competitions.

“He was a wonderful boxer. As for Sugar Ray, I love the way he boxes, dances and entertains. He did not just use power but skill and brain. He was an extraordinary boxer and I tried to combine both his style and that of James. I did not really copy them but I like to showcase my talent and entertain the crowd too. The two of them no doubt are my role models and they affected me a lot in my career,” Ajose said.

But when reminded that his fighting approach does not really match that of Leonard he said:

“I can dance, move and maneuver better than Sugar Ray but because I was boxing in the United Kingdom and the British does not like that all they are interested in is for you to win. So, I had to put away my dancing shoes and box rather than entertain. In the UK, it is called ‘showboating’. At some point I was angry that I had to do away with all that I learnt over the years. But really, I love to entertain the crowd,” he said.

Shockingly, the former African and British Featherweight Champion said he never wanted to become a professional boxer, but rather remain an amateur but the disappointment of the Sydney Olympics changed his plan.

“I really never wanted to turn pro. My plan was to win gold medals in the Olympic Games and other international amateur competition then quit boxing. But it was not to be after I was robbed at the Sydney Olympics. Everybody including myself strongly believed I was going to return from Sydney with the gold because I had beaten almost everybody in my category at one competition or the other prior to the Games including the Cuban that won the gold. Even the Algerian that won the bronze, I had earlier beaten him at the All Africa Games final some few months to the Olympics.

“So, nobody really doubted my ability to win a medal at the Sydney Games but I was robbed against my American opponent and my medal hope was shattered. I was then torn between waiting for another four years and turning pro. And I felt if I wait for another four years what was the chances that I would not be robbed again and that means another four years is wasted. So, I opted for the latter with the belief that in the next four to six years I will win a world title which will compensate for my dashed Olympic dream and that is the reason why am still pushing hard in my resolve to win a world title,” the Army Staff Sergeant said.

On why he opted for the UK in his quest for a professional career as against the United States of America that is more famous for boxing and where the game is more lucrative, he said: “I thought boxing was as big in England as it is in the US. Moreover, I got a sponsorship for training in the UK by Kronk Gym and my late manager convinced me that I’ll be well taken care of in the UK, which prompted my move to England. I also had the opportunity to go to Australia and America but I felt Australia is too far a place for me as I always love to visit Nigeria at the slightest opportunity. America is far away but London is just about six hours away from Nigeria by flight. Like I said earlier, turning pro was never a priority before now. All I wanted was to win everything as an amateur and become a coach. Because of the way Nigeria prepares for the Olympics I was not sure of winning a medal at the next edition.

“I have the talent no doubt but talent alone is not enough but one needs to work hard. Though working hard has never been my problem but we have to prepare which is not easy for individual alone to do. The government needs to fund the athletes’ preparation. I knew how we prepared for the Sydney Olympics and all other competitions. That was how I decided I have to put my destiny in my hand and turned pro,” he said.

He also blamed the Nigerian government for not assisting him in his preparation for the failed bid to win the WBC Light Welterweight fight against Lucas Martin Mattysse of Argentina.

“Most countries of the world support the preparation of their boxers for world title fights. Argentina did it for Mattysse. The money I spent in the build up to the fight against Mattysse was enough to build two bungalows in Lagos. But I want to win a world title for Nigeria and that is the reason for my continuous investment in my preparation. It’s the pride of the nation at the end of the day.I was technically better than he was. The only difference was that he was more prepared than I was. I was only fighting with share grit and talent which was not enough to win a world title. If I had had financial support, I would have prepared better,” Ajose said.

In spite of age catching up on him and a world title still yet to be won, the pugilist said he was not feeling any pressure.

“Age is just a number. You are as old as you feel. With my lifestyle, I can box for a long time but I’m not going to box for ever though. I have set my retirement target and I pray that I achieve my aim before I retire. I will do everything to win a world title before I retire. I can win a world title today and retire the next day, but what is paramount is the title. Very soon I’ll quit but I hope to win the world title and even unify it,” he reiterated.

Ajose indeed paid a lot of kudos to the Nigerian Army for their support to his course.

“The Army is one organisation that has been very supportive to my ambition, without the Army I would not have been where I am today. Joining the Army gave me a lot of confidence. I trained at the Army Sports Centre for the world title fight. Some of the equipment that are in the centre I bought them myself, while the Army provided the rest.

The soldier-boxer said if he had his way he would want his son to take after him, but the boy had opted for football.

“These days everybody wants to play football and I think he’s got some talent for football. But if I have my way I would have preferred he goes into boxing which is more of an individual game unlike football that is a team’s game. If you are a good boxer you can go to the ring and show how good you are to the world but in football it does not always work like that. And with my experience in boxing, I can always put him through. But maybe he should stick to his football because he’s not as tough as I am. But you never know he is still young and he can still take to boxing,” the 1999 All African Games gold medalist said.