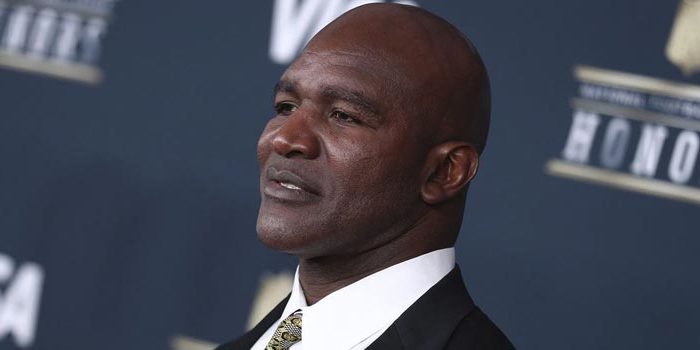 NEW YORK, NY – May 8, 2017 – Boxing legend and soon-to-be Hall of Famer Evander “The Real Deal” Holyfield has officially announced that he has entered the promotional ring, launching Real Deal Sports & Entertainment (RDSE). Now on the opposite side of the negotiating table, Holyfield will mentor the careers of young fighters by maximizing their potential and providing them with the opportunities that he didn’t have starting out. Teaming up with the four-time world heavyweight champion will be Sal Musumeci, the longtime President of Final Forum Boxing, who will serve as RDSE’s President and CEO. The parent company of Real Deal Sports & Entertainment, headquartered in Long Island, NY, will oversee The Real Deal Boxing, the promotional entity, as well as a production company and an apparel line.

“Boxing was very good to me during my career,” said Holyfield, Co-Owner of Real Deal Sports & Entertainment. “Now it is time to give something back to the sport that treated me so well.”

“I am proud to assemble the most respected, hardworking and intelligent team in the industry, starting with Evander right on through,” said Musumeci, CEO and Co-Owner of Real Deal Sports & Entertainment.

The company’s first move was to hire Eric Bentley, who has more than a decade’s worth of experience in the boxing industry, as its Chief Operating Officer. Bentley spent over seven years working for the New York State Athletic Commission (NYSAC) as a highly-respected executive, first as an event coordinator before being elevated to Director of Boxing in 2014. He has also served as a top matchmaker for Final Forum Boxing and DiBella Entertainment.

“I am extremely humbled and honored to have the opportunity to oversee this company for Evander and Sal,” said Bentley. “I see unlimited potential for Real Deal Sports & Entertainment. After our initial conversation, it became an easy decision for me to leave my position at NYSAC and join the team. Evander’s main goal is to provide today’s fighters with the opportunities and knowledge he didn’t have at the outset of his career, which is a conviction this sport desperately needs and of which I’m proud to be a part. In the coming weeks, we will be rounding out our staff, expanding our stable of talented fighters and announcing several key partnerships and initiatives that will revolutionize the sport of boxing.”

Real Deal Sports & Entertainment has already begun to build its roster and is proud to announce the signing of several promising prospects and contenders. World-ranked Ecuadorian standout Jeyson Minda (13-0-1) won the South American middleweight title last August and is rated no. 15 by the WBA. The fearless, always-entertaining Devaun Lee (7-2-1), of Jamaica, Queens, won the New York State middleweight championship last March and has already handed three favorites their first defeat. Unbeaten New York welterweight prospect Peter Dobson (8-0), from The Bronx, is a fan-favorite whenever he fights, with his brawling style. Those three up-and-comers will join the Real Deal stable that includes heavyweight contender Derric Rossy (31-12) and undefeated Las Vegas welterweight prospect Jeremy Nichols (7-0-1).

“We are excited to announce the signing of these future stars,” said Bentley. “I am very proud to have them join our team and anticipate our roster growing with many more rising prospects searching for the right outlet to successfully guide their careers.

“Jeyson Minda had a stellar amateur career in South America and is a world-ranked middleweight just a few fights away from title contention.

“‘Pistol Pete’ Dobson is someone very special to us, as he is one of the most motivated boxers with whom I’ve ever had the pleasure to meet. He has traveled all over the country, constantly pushing himself outside of his comfort zone. He is willing to face anyone and his all-out aggressive style makes him a very crowd-pleasing fighter.

“Devaun ‘Unique’ Lee is another fighter who takes on all comers. He is the current New York State middleweight champion and he has fought six undefeated fighters thus far in his young career. He is a tough assignment for anyone and deserves the opportunity to showcase his talents to the world.”

The company has an agreement with CBS Sports Net and plans to air its “Real Deal Championship Boxing” series on the network on a monthly basis. Look out for a big announcement regarding Real Deal Sports & Entertainment’s first boxing event in the days ahead.