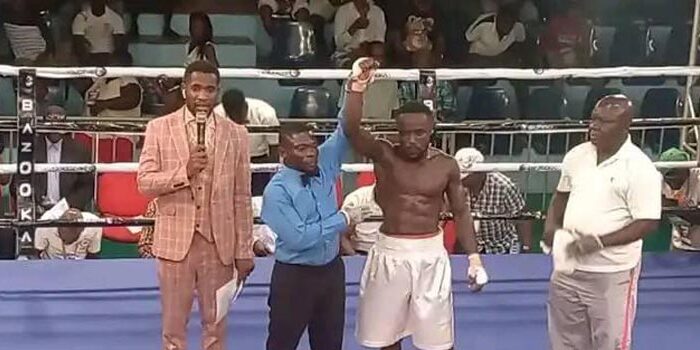 On a night where prospect Samuel Takyi’s scheduled national lightweight championship bout with Victor Kuwornu being postponed, Inusah and Tutu took over the headliner of the Bazooka Promotions and Management Syndicate card.

Inusah improves to 5-0 (4 KOs) although it wasn’t easy as he visited the canvas in the fourth round, courtesy of a right hook.

“It was a good test for me and I am glad I passed,” Inusah told BoxingAfrica.com.

Inusah started the bout searching for an early knockout. The experienced Tutu held him off and slowed the pace of the action.

Unbowed, Inusah continued to push the action in the second, cornering Tutu and unloading. The latter found his footing in the third, landing his own shots although the best punch of the frame was a big Inusah right.

In the fourth round, Tutu took over, troubling Inusah with combinations before short right hand to the jaw introduced Inusah to the mat. Inusah survived the round and came out with renewed purpose in the fifth, landing two big shots which dazed and dropped Tutu. It was all over moments later.

“I want to take this opportunity to thank everyone for coming here to support this show and I believe we have put a good fight,” said Inusah.

“I did my best but he was the better boxer on the night and I give him credit for that. I have to work hard to come back stronger in my next fight and I promise my fans that I won’t disappoint them,” a disappointed Tutu (12-49, 11 KOs) told BoxingAfrica.com after the bout.

In other action, Abdul Malik Adjei defeated Emmanuel Okine by a third round TKO in their bantamweight fight while Daniel Kotey lost his lightweight fight by KO against Issah Awal.

Philip Nguah proved too strong for Francis Aryee when he earned a second round TKO victory in their super lightweight contest.

In a welterweight contest, Ebenezer Sowah’s and debutant Fosu Thompson’s bout was declared a majority draw and Jacob Tetteh Laryea beat Kumasi-based Agyemang Boateng Prempeh via a fifth round stoppage during a middleweight contest.