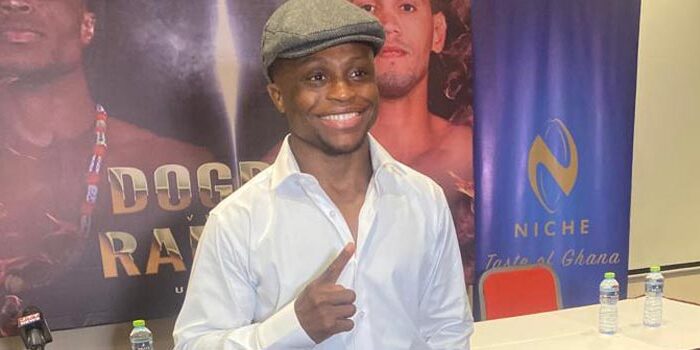 The “Royal Storm” is back.

Ghana’s Isaac Dogboe is closing in on his goal of becoming a two-time world champion as he prepares to face Cuba’s Robeisy Ramirez for the WBO World Featherweight Title on Saturday, April 1, in Tulsa, Oklahoma.

On Wednesday, Dogboe (24-2, 15 KOs) held a press conference at the African Regent Hotel in Accra to announce his next opponent, an extremely dangerous one.

Indeed, Ramirez represents Dogboe’s toughest test since his successive losses to Emanuel Navarrete in 2018 and 2019. After winning gold medals at both the 2012 and 2016 Olympics, great things were touted for Ramirez. However, he would suffer a shocking split decision loss in his 2019 pro debut to Adan Gonzales.

Ramirez (11-1, 7 KOs) has since won all of his bouts, including avenging his only loss by easily outpointing Gonzales in their rematch. Ramirez resembled a future champion in 2022, winning all three of his bouts by knockout, one of them being a fifth-round stoppage of unbeaten Abraham Nova last June.

In his most recent bout, Ramirez scored a ninth-round TKO over Jose Matias Romero last October. in the ninth round on the October 29 Vasiliy Lomachenko-Jamaine Ortiz undercard at Hulu Theater.

Dogboe, the former WBO 122-pound world titlist, was respectful of his opponent and excited at the chance to grab another world title.

“It is the perfect time for me to get the opportunity to become a two-time world champion and I can’t wait to take it,” Dogboe said during Wednesday’s presser.

“Ramirez is a tough customer and I have to admit to that. Looking at how far he has come, he will give everything to become a champion but I am determined to stop him.”

Dogboe has won four consecutive bouts since losing his WBO strap to the aforementioned Navarette. He has since defeated Chris Avalos, Adam Lopez, Christopher Diaz and Joet Gonzalez to earn a shot at another world title.

Dogboe is currently rated number one by the WBO following his split decision win over Joet Gonzalez last July. Ramirez is ranked third. They title they will be fighting for was vacated by Navarrete, who will move up to 130 pounds and take on Liam Wilson for the WBO super featherweight world championship on February 3.

“Dogboe has proved to be a force to reckon with since losing his world title in 2018 to Emanuel Navarrete.

“I believe he has what it takes to become a two-time world champion and he is the nation’s hope of winning it this year,” Neequaye said.