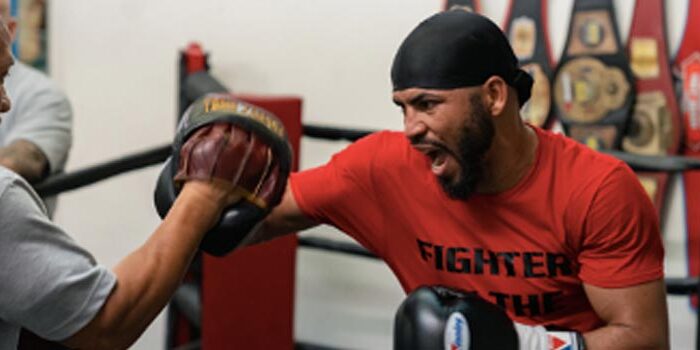 The stacked four-fight pay-per-view telecast begins at 9 p.m. ET/6 p.m. PT and is topped by Davis defending his WBA Lightweight Title against Héctor Luis García, who seeks to become a two-division champion after earning the WBA Super Featherweight World Championship this year.

Tickets for the live event, which is promoted by GTD Promotions and TGB Promotions, are on sale now and can be purchased online at ticketmaster.com and capitalonearena.com.

A 2016 Olympian for his native Dominican Republic, Garcia (16-0, 10 KOs) burst onto the scene in 2022 with a triumph over Chris Colbert that many recognized as boxing’s Upset of the Year. The 31-year-old followed that up with a dominating decision victory over Roger Gutierrez to capture the 130-pound title in August, making him a top contender for 2022 Fighter of the Year. Here is what Garcia had to say about training camp in Las Vegas with top trainer Bob Santos, facing Gervonta Davis, and more:

“Training camp for this fight has been something special as I’ve been taking all my strength and conditioning to another level. I’m running in high elevation, getting the proper sparring and everything has come together perfectly. I’ve had plenty of time to prepare for Gervonta Davis, so I’ll be the best version of myself on fight night. Bob Santos, my head trainer, is not only a masterful strategist, but he’s also controlling my diet, so my body is feeling great, and my weight is on point. The team I have around me right now is the best one I’ve had in my whole career.”

On his matchup with Davis:

“Davis in my opinion is a top pound-for-pound fighter and one of the biggest punchers in boxing, so I know going into this fight that I’m an underdog. Not a lot of people are giving me a chance in this fight, but that’s what motivates me. I was in the same situation going into the Colbert fight, but this time I had a real training camp. I believe my style will give ‘Tank’ problems. I’m a southpaw with many tricks and I will be using all of them when I step in the ring on January 7.”

On what a win does for his career:

“A victory against ‘Tank’ will solidify me as one of the best fighters in the world. I already believe that in my own mind, but the world will realize how good I am after this fight. I didn’t get here by myself. I want to thank my team for all their support. Getting this fight has changed my life forever, but winning it will do wonders for everyone on my team.”

On fighting for his countrymen back home in the Dominican Republic:

“Everyone back home will be watching this fight, so I want to make them proud with a great performance. Right now, the Dominican Republic is making big news in boxing. (WBA Super Lightweight World champion) Alberto Puello is a world champion and Carlos Adames will be soon. All of us are family and we love the support we get from our people back home. Fighters from the Dominican Republic are on the rise and we are here to stay.”