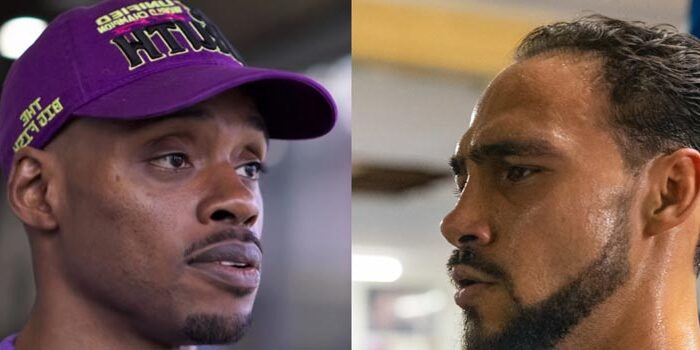 BoxingScene.com has learned that plans are in place for WBA/WBC/IBF welterweight champ Errol Spence and former unified titlist Keith Thurman to meet in an April clash to headline a Pay-Per-View event.

The fight was previously ordered by the WBC as a mandatory title fight during its annual convention last November in Acapulco, Mexico.

However, none of Spence’s three titles will be at stake as the bout is due to take place above the welterweight limit.

ESPN.com boxing insider Mike Coppinger was the first to report the development.

Another sanctioning body had to grant approval for the fight to move forward under current conditions. WBA president Gilberto Jesus Mendoza confirmed to BoxingScene.com that representatives for Spence sought approval to take the non-title fight. The WBA conditionally approved the request, with a resolution of the matter still to be submitted to all involved parties.

While none of his titles are at risk for the still-discussed fight with Thurman, Spence will be required to next defend his crown versus the winner of the currently postponed Eimantas Stanionis-Vergil Ortiz Jr. WBA ‘Regular’ welterweight title fight. The lone exception to be granted will be if Spence (28-0, 22KOs) secures an undisputed championship showdown with WBO welterweight titlist Terence ‘Bud’ Crawford (39-0, 30KOs), though such plans will carry a 60-day deadline to secure a deal before the mandatory title fight is ordered.

Spence was previously due to next face Stanionis after previous plans collapsed for a superfight with Crawford last fall. The WBA agreed to stand down and allow the WBC to first proceed with its mandatory defense, prompting the Mexico City-based sanctioning body to order Spence-Thurman last November.

The ruling forced Stanionis (14-0, 10KOs; 1ND) to enter his own mandatory title defense versus Ortiz (19-0, 19KOs), whose promoter Golden Boy Promotions secured the rights to the fight during a December 12 purse bid held during the WBA annual convention.

Golden Boy planned to stage the fight on March 18 at a location to be named in the greater Dallas area—minutes from Ortiz’s hometown of Grand Prairie, Texas. As BoxingScene.com previously reported, the fight was since postponed after Stanionis was forced to undergo an emergency appendectomy over the weekend.

How the non-title fight status affects Thurman’s mandatory status in the WBC welterweight rankings remains unclear at this time. WBC representatives did not immediately respond to an inquiry seeking confirmation as this goes to publish.

As for Thurman, all that matters for now is landing the Spence fight itself—regardless of the stakes.

“I’m aware and on board,” Thurman said in a message passed along to BoxingScene.com through his team.

Though never announced, there were previous talks for Spence-Thurman to take place on February 4. The targeted timeframe was compromised after Spence suffered minor injuries from a December 10 three-car accident in his hometown of Desoto, Texas. Spence’s vehicle was struck by an unlicensed and underage driver, who—according to the police incident report obtained by BoxingScene.com—was speeding and ran a red light before crashing head-on into and totaling Spence’s vehicle.

Spence has not fought since a tenth-round stoppage of Yordenis Ugas on April 16 at AT&T Stadium, home of the NFL’s Dallas Cowboys in Arlington, Texas. Spence won the WBA and defended his WBC and IBF titles in their Showtime Pay-Per-View main event.

Both boxers fight under the Premier Boxing Champions (PBC) banner. Representatives from PBC have not yet confirmed the fight or date, though the timing is line with Spence’s recent but cryptic tweet regarding his return.