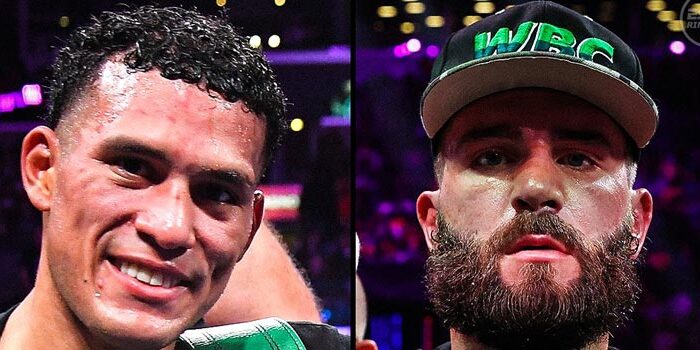 A date and a site have been solidified for the grudge match between super middleweight rivals David Benavidez and Caleb Plant.

BoxingScene.com has learned that Benavidez and Plant will fight March 25 at MGM Grand Garden Arena in Las Vegas. Phoenix’s Benavidez (26-0, 23 KOs) and Plant (22-1, 13 KOs), a native of Ashland City, Tennessee, jointly announced through their social media accounts November 3 that they agreed to contractual terms.

The bout between Benavidez, 26, and Plant, 30, will headline a four-fight Showtime Pay-Per-View card.

The winner of their 12-round, 168-pound match, which will be contested for Benavidez’s WBC interim championship, will become the mandatory challenger for Canelo Alvarez’s WBC super middleweight title. Alvarez stopped Plant in the 11th round of their title unification fight 14 months ago at MGM Grand Garden Arena, but Benavidez wants his own opportunity to challenge the fully unified 168-pound champion.

Benavidez, who is a 2-1 favorite over Plant according to FanDuel sportsbook, had planned to fight Venezuela’s Jose Uzcategui (32-5, 27 KOs) next in a lower-profile fight to stay busy. Soon after Plant viciously knocked out Anthony Dirrell on October 15, however, representatives for Benavidez and Plant agreed to fight next.

Plant and Benavidez have talked trash about one another over the past few years, yet negotiations never took a serious turn until last fall.

Plant’s brutal knockout of Dirrell, a former WBC 168-pound champion, came in his first fight since Alvarez (58-2-2, 39 KOs) stopped him to become boxing’s first fully unified super middleweight champion of the four-belt era in November 2021 at MGM Grand Garden Arena. A picturesque left hook by Plant knocked Dirrell (34-3-2, 25 KOs) unconscious in the ninth round on the Deontay Wilder-Robert Helenius undercard at Barclays Center in Brooklyn.

Benavidez will fight for the first time in 10 months when he opposes Plant, whose performance against Dirrell earned him BoxingScene.com’s “Knockout of the Year” award for 2022.

In his most recent action, Benavidez stopped Canadian contender David Lemieux in the third round. Benavidez dropped the former IBF middleweight champ in the second round and referee Harvey Dock halted the action while an overwhelmed Lemieux (43-5, 36 KOs) was still standing during the third round May 21 at Gila River Arena in Glendale, Arizona.