In front of a capacity crowd at Accra’s Bukom Boxing Arena, Ashie exhibited the skill and will that made him a Bukom favorite, stopping nemesis Robert “Stopper” Quaye in eight rounds to win the IBF Inter-Continental Lightweight title.

Though both fighters are from Bukom, it was a partisan crowd in favor of Ashie and he didn’t disappoint. 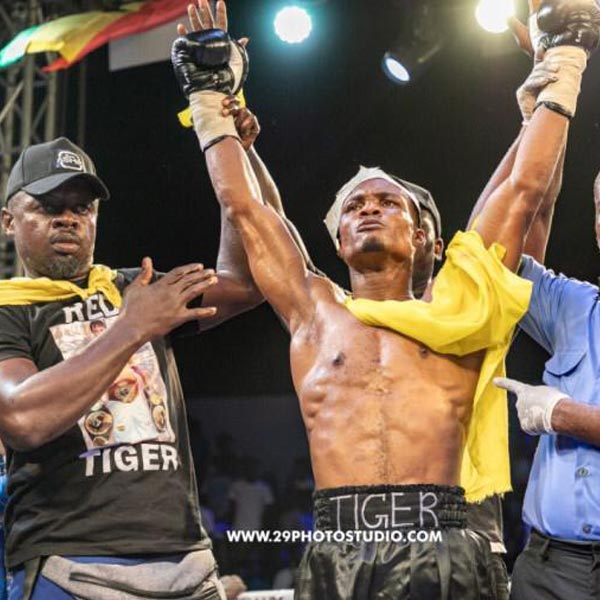 Ashie (33-5-1, 24 KOs) scored two knockdowns in the eighth, the first changing the entire dynamic of the bout. It was a short left hook to the ribs that deposited Quaye (20-1, 17 KOs) on the seat of his trunks. Quaye’s corner argued profusely against referee Roger Barnor’s call, believing a low blow had led to the knockdown although replays confirmed it was indeed a body shot.

An angry Quaye also complained after he rose. Ashie made this moot by proceeding to batter him with a vicious two-fisted assault that eventually drove Quaye to the canvas again.

This time, the wobbly Quaye could barely stand as he made it to his feet. As Barnor issued another count, Quaye’s corner leaped into the ring to save their man from further punishment.

“This is not a fair result and we are not happy about the whole thing,” Quaye trainer Adama Addy told BoxingAfrica.com.

“How do you rule for a knockdown when the punch that took the boxer down was a low blow? I was worried because Ashie kept landing low blows and the referee kept warning him. So you have to ask yourself why he was not deducted points for his consistent low blows?

Addy also argued that Ashie’s team entered the ring during the first knockdown and that should have disqualified their fighter.

“You were counting for Quaye and then some members of Ashie’s camp came into the ring, which means they conceded defeat but that didn’t happen,” said Addy.

Barnor disagreed. “I did nothing wrong because from where I stood as the referee, it was a clean body shot so I had to effect the mandatory count,” he explained to BoxingAfrica.com.

“They lost and have to accept it rather than blaming it on me. Was Quaye not floored from unanswered punches? It was a clear defeat and everyone at the fight saw it.”

It was a stunning turn of events for Quaye. Some insiders believed the 29-year-old boxer-puncher was simply too young and too powerful for his aged foe.

Quaye was equally confident, making his way toward the ring by riding a horse with the sounds of R. Kelly’s “World’s Greatest” blaring in the background.

The veteran Ashie opted for a simpler entrance. The former WBO Africa lightweight champion came into the arena on the shoulders of his cornerman to Bob Marley’s “Who the Cap Fits,” as the crowd exploded in adulation.

Quaye got off to a strong start in the early going, using his jab and movement to offset the hard-charging Ashie. The second featured more of the same. Quaye won the round although a hard right from Ashie at the end of the frame was a harbinger of what was to come.

Another right in the third appeared to momentarily buzz Quaye. Ashie followed up with two more big rights, one of which opened a cut above Quaye’s left eye and forced him to clinch.

The action heated up in the fourth and fifth with the two combatants trading shots. Quaye had his moments, landing clean left hooks on Ashie’s jaw including one which rocked Ashie toward the end of the fifth.

The paced slowed in the sixth and seventh. Ashie continued to be the aggressor as Quaye boxed. Then came the fateful eighth, beginning with heavy toe-to-toe action. It was Quaye who first landed a series of combinations before Ashie replied with hurtful punches of his own.

An Ashie left to the body caused the first knockdown. The ensuing volley on a badly dazed Quaye caused his corner to hop in the ring and rescue their fighter while admonishing Barnor for his actions.

“We are ready for a rematch if the promoter and our opponents want it after all that happened,” said Addy. “I don’t think a winner would have been announced without the Vice-President in attendance but we are not happy with the turnout of events.”

Super lightweight Faisal Abubakar (7-0, 7 KOs) was too strong for Emmanuel Aryee (1-2, 1 KOs), stopping him in the first round; prospect Daniel Gorsh (4-0, 4 KOs) earned a third-round KO against Johnathan Pappoe in a bantamweight contest.

Nigeria’s Oto Joseph won the ABU lightweight title with an eighth round TKO victory over Tackie Annan of Ghana with Enoch Tettey Tetteh triumphing over Edward Kambassi in one round of their bantamweight contest.