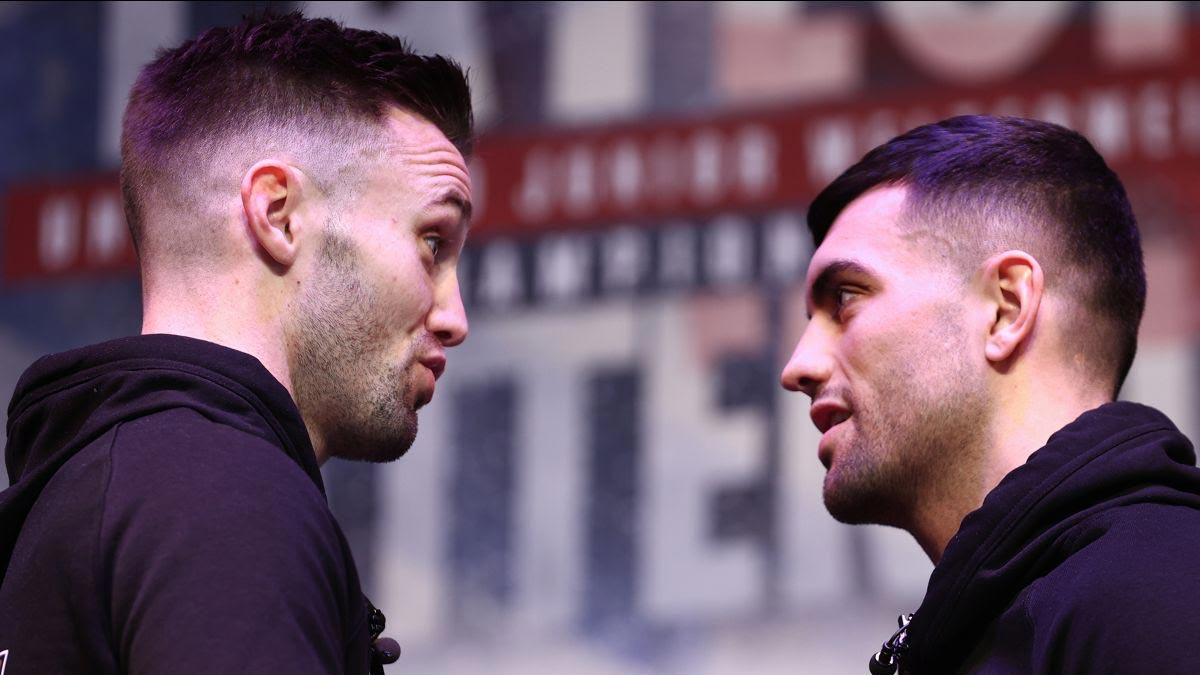 The fists did not start flying, but there were fireworks between undisputed junior welterweight world champion Josh Taylor and top contender Jack Catterall. Taylor and Catterall will lock horns for all the belts Saturday evening at OVO Hydro in Glasgow, Scotland, a short drive from Taylor’s hometown of Prestonpans.

In the 10-round featherweight co-feature, Cuban star and two-time Olympic gold medalist, Robeisy Ramirez, will face Irish contender Eric Donovan. Ramirez has not fought in the UK since the 2012 London Olympics, the site of his first Olympic triumph.

Taylor-Catterall, Ramirez-Donovan, and additional fight action will stream live and exclusively on ESPN+ in the United States at 2 p.m. ET/11 a.m. PT.

Irish welterweight star Paddy Donovan (7-0, 5 KOs) goes for his third consecutive knockout in a six-rounder against Czech veteran Miroslav Serban (13-8, 7 KOs). Kieran Molloy, a 5’11 southpaw from Galway, Ireland, will make his long-awaited professional debut against Damian Esquisabel (4-7) in a four-rounder. Molloy earned a host of amateur accolades, including a bronze medal at the 2018 EU Championships. Featherweight phenom Kurt Walker, who represented Ireland at the Tokyo Olympics and won gold at the 2019 European Games, will make his pro debut  in a four-rounder against Jaroslav Hriadel (1-2, 1 KO).

This is what the fighters had to say at Thursday’s press conference.

“Everyone has been starved for nights out and things to do these last two years. There hasn’t been much happening. Everyone has come out in numbers — {the arena} has sold out — and I’ve got an abundance of fans coming from England supporting me. I’ve probably got more fans coming from England to support me than Jack has coming to support him. It’s a great night. I can’t wait.”

“It’s Jack on Saturday. It’s his turn next. He’s going to get the beating Saturday, which I’m going to dish out. All I’m thinking about is Jack Catterall. He’s trying to take away what I’ve worked so hard to get. I’ve cleaned out the division. He’s getting a shot at the jackpot in one fight. I’m going to put him in his place on Saturday.”

“He’s good. We’ll find out on Saturday, but he’s in for a long night. A long, painful methodical beatdown on Saturday.”

“I just don’t see a way that he can beat me in this fight. I don’t know how he’s going to do it, but I’m prepared for every single way. Whatever he brings, I’m more than prepared for.”

“I’ve been mandatory for the WBO title. After waiting two years, I’ve got a chance now to capture the undisputed. I’ve not just come up here to make up the numbers. I’ve been waiting two years for this opportunity.”

“I think the respect has been there. Me and Josh know once the bell goes, the respect is out of the window. We can shake hands after. We’re going to punch each other’s heads in and that’s in.”

“Scotland and the UK in general is a very special place to me. It is deeply ingrained in my memory because I have fond memories earning my first gold medal in London 2012. I’d like the fans to see the new Robeisy Ramirez and this new era in my career as a professional.”

“Of course I feel like I can replicate my amateur success as a professional. It is my only mission, not only to replicate, but to best what I did in the amateur level by winning a world championship. And if it means that I have to fight in the UK, Asia or wherever I have to fight, I will do that. I am used to it. I’m on a mission to become a world champion and show that I am going to be a better world professional than I was an amateur.”

“It’s a big night, probably the biggest night of my boxing career. I think it’s fair to say that. I’m under no illusion as to how big the task is going to be, but when my manager, Mark Dunlop, presented me with this opportunity, he didn’t have to ask me twice. I’m in this game to prove myself, and when I do finally look back on my career, I want to be remembered as someone who took on great fighters and was involved in great fights. And you don’t get any better than a two-time Olympic gold medalist. I cannot wait for this, relishing this opportunity.”

“{The fans} can expect a world class performance. I believe I am one of the best prospects in the world in boxing right now coming through. I want to be one of the best fighters in the history of Ireland, and it’s going to start Saturday night when I get in that ring. I don’t believe any fighter in the world will beat me. I’ll beat any challenge that comes in front of me.”