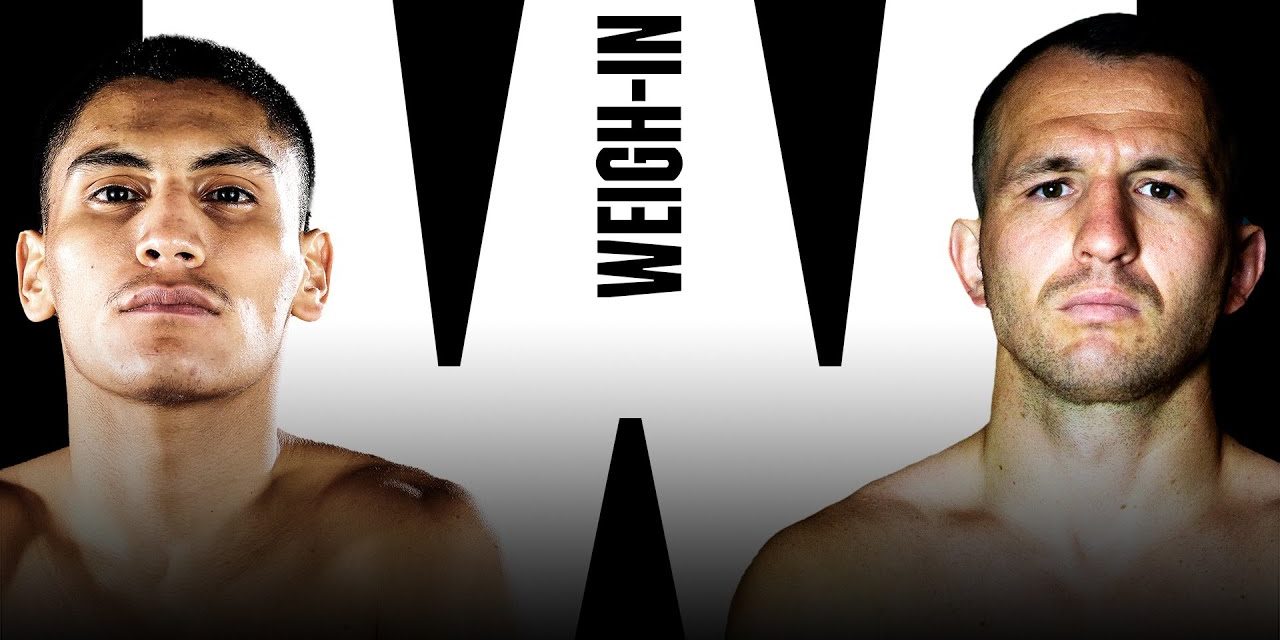 Vergil Ortiz Jr. and Egidijus Kavaliauskas both made weight ahead of their 12-round welterweight bout, which will air live on DAZN from the Ford Center at The Star in Frisco, Texas. Ortiz weighed 147 on the nose, while Kavaliauskas came in slightly under at 146.6 pounds.

Ortiz (17-0, 17KOs) enjoys his second straight local headliner. The unbeaten welterweight contender stopped fellow Dallas native and former junior welterweight titlist Maurice Hooker inside of seven rounds this past March at Dickies Arena in neighboring city Fort Worth. Preceding the bout was a minor hiccup at the scale, when Ortiz was slightly over the welterweight limit on the first try, though quickly returning to easily make weight.

The event also comes two years almost to the day of a true homecoming for Ortiz, who stopped former title challenger Antonio Orozco in the 6th round of a DAZN show from his hometown of Grand Prairie, Texas.

Kavaliauskas (22-1-1, 18KOs) represents the latest step up in Ortiz’s career and perhaps the Texan’s most established true welterweight foe to date. A two-time Olympian for Lithuania, Kavaliauskas remains a bubble contender even after his lone career defeat, a December 2019 ninth-round stoppage at the hands of welterweight titlist and pound-for-pound entrant Terence Crawford.

One win has followed for the 33-year old Kavaliauskas, scoring an eighth-round stoppage of Canada’s Michael Zewski last September. The bout was his last with Top Rank, having since tested the free market agent in landing this opportunity.

The evening’s chief support is a rubber match between Roger Gutierrez and Rene Alvarado, coming just seven months after their fiercely contested battle.

Gutierrez (25-3-1, 20KOs) weighed 130 pounds, while Alvarado (32-9, 23KOs) checked in at a fight-ready 129.2 pounds. Their rematch—which took place this past January at American Airlines Center in Dallas—saw Gutierrez score a narrow decision win on the strength of three knockdowns. The feat netted a secondary title for Maracaibo, Venezuela’s Gutierrez, who dedicated the achievement to his late mother who passed away less than two months prior.

Alvarado was attempting the first defense of the belt he nabbed in a stoppage win over Andrew Cancio in November 2019, avenging a prior defeat. Interestingly, the Managua, Nicaragua native beat Gutierrez in their first of this series, earning a seventh-round knockout in their July 2017 non-title fight.

Also on the telecast, Puerto Rico’s Danielito Zorrilla (15-0, 11KOs) enters his latest crossroad bout as he faces Mexico’s Pablo Cesar Cano (33-7-1, 23KOs) in a scheduled 10-round junior welterweight contest. Zorrilla weighed 139.8 pounds; Cano was still en route and will weigh in at a later time.