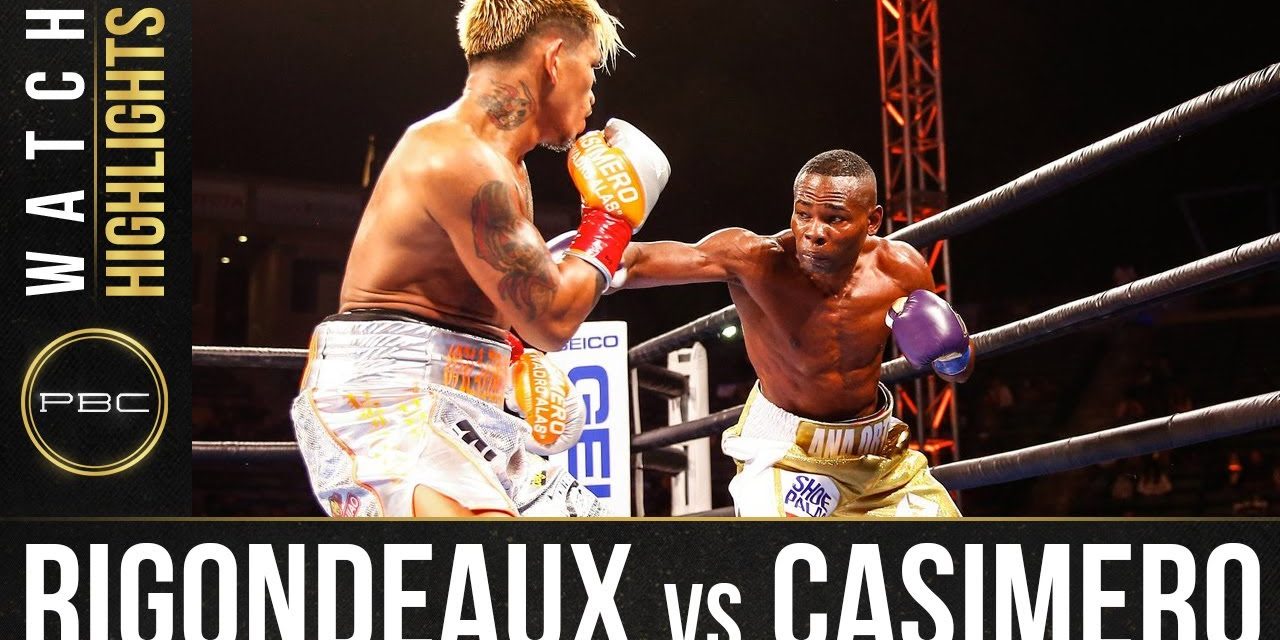 A three-division world champion, Casimero (31-4, 21 KOs) made his second successful title defense at 118-pounds, earning a career-best victory over the longtime 122-pound champion Rigondeaux (20-2, 13 KOs), who moved down to bantamweight in 2020.

“I’m excited to get the win,” said Casimero. “Rigondeaux is a good boxer and two-time Olympic gold medalist. I was worried, because he said he wouldn’t run, but he ran the whole time.”

The bout started with an eventful first round, in which it appeared for a moment that a Casimero left hook to the back of Rigondeaux’s head would lead to a knockdown, but referee Jerry Cantu ruled the moment a slip. During the exchange, Casimero threw several punches while Rigondeaux was on one knee, earning a warning from the referee.

From that point on, Rigondeaux remained steadfast to a defensive strategy that saw Casimero forced to chase his opponent around the ring. Meanwhile, Casimero stayed dedicated to pushing forward, looking to slow Rigondeaux down with body shots to set up power shots to the head.

“My expectations were for a knockout,” said Casimero. “Me and all my fans wanted that. I did my best to knock him out, but he was just running and not fighting.”

Rigondeaux was content countering his charging opponent, doing a majority of his damage with variations of his dangerous left hand. In a bout with numerous close rounds, Casimero ended the fight with a narrow 47 to 44 edge in punches landed, including a 41-28 tally in power punches.

Those power punches and sustained aggression proved to be enough for Casimero to hold onto his 118-pound title in the eyes of the judges, as scores of 117-111 and 116-112 overruled one judge’s 115-113 card in favor of Rigondeaux. While Rigondeaux disputed the decision, Casimero looked forward to potential unification clashes with WBC champion Nonito Donaire and WBA and IBF titleholder Naoya Inoue.

“Nobody wants to fight with me because I frustrate them in the ring,” said Rigondeaux. “I landed the punches that I needed to in order to win the fight tonight. This is how I win. I have these God-given skills and this is the way I display them. I’m a unique fighter. It’s my style and it’s the only one I know. You can see I’m still better than anyone else in the lighter weight classes and I’m going to keep fighting.”

“I had a three-fight plan,” said Casimero. “First was Rigondeaux, and I beat him. Next is Nonito Donaire and then finally Naoya Inoue.”

The co-main event saw rising contender Gary Antonio Russell (18-0, 12 KOs) and former world champion Emmanuel Rodriguez (19-2, 12 KOs) fight to a no-decision just 16 seconds into the first round of their 118-pound matchup, after an accidental headbutt injured Rodriguez and ended the fight.

“It happens,” said Russell. “I was looking to establish my jab and I tried to set up a hook, and he came in at the same time. It’s very disappointing.”

“I feel okay,” said Rodriguez. “I’m a little frustrated after putting in all this work for the fight to end so quickly with nothing happening. With the headbutt, maybe if there was no blood, we would have been able to continue. But once I saw all the blood, I knew it was over.”

The crossroads battle for the Interim WBA Bantamweight Title was meant to offer Russell a chance to establish himself as a true title contender and give Rodriguez an opportunity to move one step closer to becoming a two-division champion. Rodriguez attempted to counter an incoming Russell attack, which led to the two southpaws clashing heads.

“I was actually in camp for about four months,” said Russell. “I prepared great for this fight. I was really looking to broadcast my talents and show everyone what’s in my arsenal. Unfortunately, the headbutt happened.”

Rodriguez fell to the canvas immediately and was bleeding from his nose, prompting referee Sharon Sands to wave off the bout, which was ruled a no-decision.

“Of course, I would like to come right back,” said Russell. “If he can do it, I want to get right back in there with Rodriguez.”

“I don’t want to lose the condition that I’m in,” said Rodriguez. “I prepared really hard for this fight. As soon as the injury is fixed, I’ll be back in the ring and I’d like to fight Russell again.”

In the opening bout, former world champion Rau’shee Warren (19-3, 5 KOs) dominated Damien Vazquez (16-3-1, 12 KOs) on his way to a second-round stoppage in their bantamweight showdown. Warren scored his first knockout victory since 2015, after going the distance in his previous eight fights.

A three-time U.S. Olympian, Warren came out fast in the first round, using his speed advantage to beat Vazquez to the punch, connecting with a right hand midway through the frame that scored the fight’s first knockdown. Vazquez was able to rise to his feet, but was sent to the canvas for a second time moments later by another sharp right hand from Warren.

Cincinnati’s Warren landed an astounding 22 of 39 power punches in that first round, and continued his dominance into the second. Warren perfectly timed a straight left hand that badly rocked Vazquez, forcing referee Ray Corona to jump in and halt the bout at 2:18 in the second round.

“Next fight is a title fight,” said Warren. “I am the number one contender for the WBA. I want to thank my team for putting me in this position and pushing me. They know what kind of fighter I am. I am going to be champion. Next fight I am grabbing that title. Maybe I will fight the winner of the main event tonight (Rigondeaux vs. Casimero).”

“My performance was good,” said Lee. “It could have been better. There’s always room for improvement. At the end of the day, we got the job done. I’m definitely ready for the next level. It’s only right for me to step up the competition. I’ll take on anybody who’s ready.”

In the co-main event, Roger “The Kid” Gutierrez (26-3-1, 20 KOs) successfully defended his WBA Super Featherweight World Championship against Rene “El Gemelo” Alvarado (32-10, 21 KOs) in a scheduled 12-round fight. The fight went the distance as both fighters were game to exchange blows. Gutierrez secured the victory via unanimous decision with the judges scoring the fight 116-112, 115-113, and 116-112.

“I hurt my right hand, it was very inconvenient because I feel like I could have ended the fight earlier. But I want to thank god we were victorious and that is the most important thing. I know Rene is a warrior, but we had a good fight today and we are happy to take on the next challenge, and perhaps fight Leo Santa Cruz,” said Gutierrez.

Alvarado stated, “I feel like I dominated the majority of the fight. I do not feel like the decision was fair. In the last round, I did get the cut on my left eye and I couldn’t see, but I know that I closed those two rounds.”

In the second broadcasted fight of the night, Felix “El Gemelo” Alvarado (37-2, 32 KOs) was set up against Israel Vasquez (10-5-2, 7 KOs) in a programmed 10-round flyweight event. However, the fight ended early as Alvarado connected a right hook to Vasquez, dropping him to the floor in the first round; winning the fight by knockout.

“I did feel a little unstable with the change of opponents and of course I would love to fight Eric Lopez, but unfortunately that didn’t happen due to the visa issues. Fortunately, we had a good training camp and we were prepared for Israel. Luckily the fight ended early enough where he wasn’t injured and I wasn’t injured,” said Alvarado.

The DAZN opener had Dallas native George Rincon (12-0, 7 KOs) fighting against Nikolai Buzolin (8-4-1, 4 KOs) from Brookly, NY. in a scheduled 8-round welterweight bout. The fight started off slow as the fighters took the time to approach the fight cautiously. By the 4th round, both fighters began to feel more comfortable and confident with Rincon landing some impressive shots to Buzolin’s body. Buzolin was not shy at returning punches and at times pursued Rincon around the ring looking for more action. A head butt by Buzolin in the last round stunned Rincon, opened up a wound on the left side of his forehead, and caused the Brooklyn native a point deduction. Ultimately, the Dallas favorite, Rincon, took the victory via unanimous decision with all three judges scoring the fight 80-72.

“He was a shorter fighter with a very awkward style and I had to be careful with those looping hands. There were a few things that I wish that I could have made more clear during the fight, but his style didn’t really help. Just happy that I was able to be here, fight in my hometown, in front of my friends and family. Glad we got the win and I plan to go back to the gym and keep getting better,” said Rincon.

The Golden Boy Fight Night undercard streamed live on Facebook Watch included a 10-round super lightweight bout between Alex Martin (17-3, 6 KOs) and Josec Ruiz (23-5-3, 16 KOs). Martin, of Chicago, Il. faced a tough opponent in Ruiz, as the Miami native was willing to take a punch to land a punch. Martin, however, tried to use his reach and footwork to keep his distance and control the action. The strategy paid off as Martin was unanimously crowned as the victor with scores from all three judges at 100-90.

Martin said, “I knew that I hurt him with that body shot in the last round and he started to fold over. I still could have followed up with more body shots, but I am happy I got the win. I am ready to come back. I am motivated and just thankful to God for the opportunity.”

In the opening bout of the night, Dallas native Alex Rincon (9-0, 6KOs) took on Sunny Duvesonne (11-4-2, 8 KOs) of Avon Park, Fl. The 8-round super middleweight bout went the distance as we saw both fighters exchange blows to a rowdy crowd cheering on the hometown favorite Rincon. Duvensonne visibly hurt Rincon in the third round as Rincon used his feet to keep the distance between them for the remainder of the round. By the end of the fight, both fighters did their best to control the pace of the fight as they each unleashed a flurry of punches against each other leaving Duvensonne visibly shaken as the eighth round came to a close.

“He was a tough warrior, you have to respect him. I knew he was going to be a durable fighter. I also knew that I needed to use my jab to counter his jab and set up the shot. But I feel good, I think it was about time I got some war wounds so people can believe I am a fighter,” said Rincon.