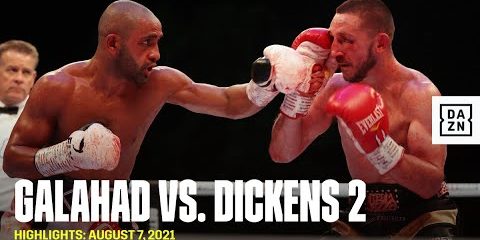 Kid Galahad’s long journey to win the world title he always felt it was his destiny to win final came to fruition as he claimed the vacant IBF featherweight title, as Jazza Dickens was pulled out by his corner at the end of the eleventh round at Fight Camp in Essex.

Galahad, 31, had been groomed for success, following a line of stars to emerge from the Sheffield gym of the late Brendan Ingle, following Herol Graham, Naseem Hamed and Kell Brook.

But things had never been smooth. A failed drugs test threatened to totally derail his career and when he did return to the ring, he lost a contentious split decision to Josh Warrington for the IBF title.

John Ingle, his manager, said he had cut a grumpy figure in the week, a realization that this might be his last chance. But he didn’t waste it, beating Dickens to the punch throughout and slowly busting him up.

“I’ve been waiting 19 years for this and I’ve finally got it,” Galahad said. “People can think what they like but I am a full-time professional and I outboxed someone who I think will definitely be a future world champion.

“When I got in there I had tunnel vision. Everyone else fell apart, Josh Warrington and Can Xu, and they got smashed apart. I went in there after 18 months off and smashed him up.”

He also paid tribute to Brendan Ingle. “If it wasn’t for Brendan I would probably have been locked up or dead,” Galahad said.

Dickens started the brighter, beating Galahad to the punch and winging in some fast southpaw rights. Galahad was struggling to get his punches off, while the pair constantly stepped on each other’s feet.

But Galahad had the better of the second, putting Dickens under pressure towards the end of the round.

The last time the pair met was for the vacant British super-bantamweight title eight years ago in a converted steelworks in South Yorkshire. Then they were both unbeaten prospects, now they were probably looking at their last chance to reach the top.

Dickens upped the pace in the third round, landing two good right hooks and a big swinging left over the top, but the fourth was close, Galahad being the more accurate with his punches.

Things swung in Galahad’s direction in the fifth round, as he started to outwork Dickens, switching and keeping the pressure on the Liverpudlian, who was struggling to land anything in reply.

Dickens’s manager, Tony Bellew was imploring him to “get your shots off”, but Dickens was struggling to put much together, while Galahad continued to control the space in the sixth round, landing enough to win the round.

Dickens had a bit more success in the seventh, as he was able to get closer and put some pressure on Galahad, but Galahad started the eighth round well and pinged Dickens with a right hook. Dickens was trying to increase the pace, but Galahad was beating him to the punch and stopped him in his tracks with a good body punch, although Dickens landed a good one back later in the round.

By now, Dickens was swollen around both eyes and cut over the left, but Galahad kept catching him with the jab and keeping him off. Early on the tenth, Galahad landed a good right that seemed to hurt Dickens and he pressed home his advantage, and while Dickens landed a decent left in reply, Galahad shrugged it off, although Galahad was then docked a point by referee Michael Alexander for stepping on Dickens’s feet.

The eleventh was a tough round for Dickens, as he just walked into a non-stop flurry of punches from Galahad. Walking back to his corner, his face looked a mess. Blood poured from his nose and the cut over his left eye, while his features were barely recognisable. Derry Mathews, his trainer, pulled the plug.

Galahad now has a series of interesting match-up possibilities, including Josh Warrington, or Leigh Wood, who won the WBA regular title last week and lost to Dickens last year.

But he vowed to promoter Eddie Hearn that he would become undisputed world champion.

“If you give me the opportunity, I will clean up the division,” he said.