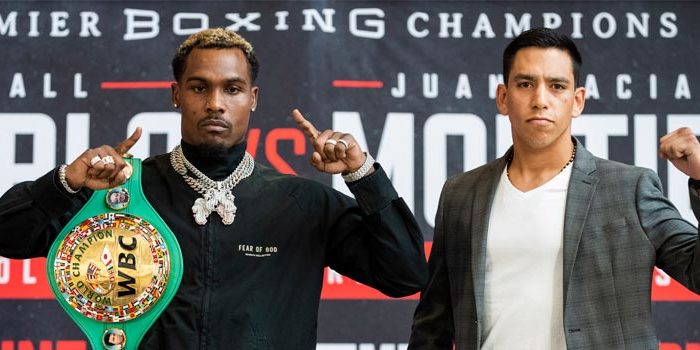 Unbeaten WBC Middleweight World Champion Jermall Charlo and hard-hitting challenger Juan Macías Montiel previewed their upcoming showdown during a virtual press conference Wednesday, as they near their matchup that headlines action live on SHOWTIME on Saturday, June 19 in a Premier Boxing Champions event from Toyota Center in Houston.

The event is promoted by Lions Only Promotions and TGB Promotions. Tickets for the live event are on sale now and can be purchased at toyotacenter.com.

Charlo has established himself as a force in two divisions and will seek to thrill his hometown crowd against Mexico’s Montiel, in a first-of-its-kind Juneteenth Day boxing celebration. Charlo will fight in Houston for the fourth time as a pro and look to keep his undefeated record intact against the upset-minded Montiel.

Here is what the press conference participants had to say Wednesday:

“There’s no pressure for me. I’m a fighter and pro at what I do. It’s my legacy on the line. So no matter what, I have to continue to be great. I have the best trainer in the world in Ronnie Shields and I’m so ready for this fight.

“I know Montiel is going to bring a strong challenge and try to knock me out. You put the pressure on yourself that way though. Normally when people talk trash, I lay them out. I’m going to be prepared. My mental has matched up with my physical ability and I’m stronger than ever.

“Montiel is a pressure fighter who fights from both stances. He’s strong with both hands and he’s going to try to fight fire with fire.

“When you’re the world champion, everyone wants to beat you. It doesn’t matter who they put in front of you, because they’re all training their hardest. He’s going to be in shape, but I’m going to be just as fast, strong and smart. My title is on the line, so I have to defend it.

“I’m making 160-pounds perfectly right now. I’m not finished at 160-pounds. There are bigger fights ahead of me though. No matter what happens, those bigger fights are coming. Right now, I’ve got something for Montiel.

“I’m giving you the best Jermall Charlo that I can give you. Montiel is going to come forward and give me some power. I’m going to put it in my pocket and charge my phone with it. You’re going to see a great night of boxing on June 19.

“I get a chance to fight for my community and my people on June 19. It’s going to be an amazing night of boxing. Everyone who stands up for me, I get to stand back up for them.”

“I’m excited and I’m ready. This is a dream fight that I’ve been waiting for all my life. We’ve been getting ready for months and I’m more than ready to step up to this challenge.

“Whoever thinks this is an easy fight for Jermall, doesn’t know me at all. That’s like saying a spark can’t light a forest on fire. I’m going to show on June 19 that I’m more than up to the challenge of showing who Juan Macías Montiel is.

“I don’t see any weaknesses in Charlo’s game. He’s number one for a reason. I’m going to have to fight him to the best of my abilities. He’s at the top of his game and I respect what he brings.

“I think I have matured since my losses. I have trained very smart for this opportunity. I’m not going to let this slip away because of anything that I didn’t do.

“My record speaks for itself. I am all about the knockout and that’s what I’m coming for on June 19. I’ve been perfecting my whole game since my last fight. The power is definitely going to be the key for me.

“I had to overcome a lot of adversity against Hugo Centeno Jr. I was not 100% healthy in that fight, but all of that is behind me now. I’m not looking back, everything is focused on June 19 right now.

“I have never had a training camp as long as this one. We’ve upped the intensity and put focus on getting more rest and better nutrition. Everything that I could need as a fighter has gone into this training.

“I feel blessed to be able to achieve my dream of fighting for a world title. That’s going to be my sole focus on June 19. I’m going to make my dream come true.

“It’s a dream come true to fight a champion like Charlo. If I keep doing things the way I’ve done, I feel like I’ll show that I deserve this opportunity.”

“Jermall Charlo is the undefeated WBC world champion and I believe he’s the best middleweight in the world. He’s held titles in two weight classes and in his last fight at 154-pounds he took on the number one challenger, Julian Williams, and retained his title with a fifth round stoppage, dropping him three times. We know that Julian went on to become a unified champion after that fight, showing just how good of a win it was.

“Jermall is coming off an impressive victory over Sergey Derevyanchenko. Derevyanchenko had just given Gennadiy Golovkin the most grueling fight of his career and Charlo handled him easier than Golovkin or Daniel Jacobs. It just shows you how good he is.

“Charlo will have his hands full against the Mexican slugger Juan Macías Montiel. He’s 27-years-old and WBC ranked number four. We all know Montiel has heavy hands. He has 22 knockouts in 22 wins. Every loss he’s had, except against Jaime Munguia, has been a split or majority decision.

ABOUT CHARLO VS. MONTIEL

Charlo vs. Montiel will see undefeated WBC Middleweight World Champion Jermall Charlo enter the ring for a Juneteenth Day celebration in his hometown when he takes on hard-hitting Juan Macías Montiel on Saturday, June 19 at Toyota Center in Houston headlining a Premier Boxing Champions event live on SHOWTIME.