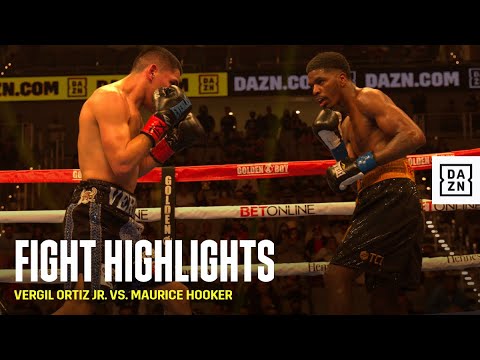 The fight, which was stopped at 36 seconds of the seventh round, was streamed live exclusively on DAZN worldwide, including the U.S. and Mexico.

“I felt like I did pretty good,” said Vergil Ortiz Jr. “There’s always room for improvement. I could have done a lot of things better. Hooker showed me that he is durable. He can definitely take a punch. He was smart. He was trying to throw around my guard. But I just knew what to do.”

“The game plan was to slow him down,” Ortiz Jr. continued. “I knew he was going to want to box. I knew he wouldn’t want to stay inside. I neutralized his plans. I did think I would go the distance at some point in the fight. But to be honest the head shots weren’t hurting him. He can take a punch. That’s when I started investing into the body. This win gives me more confidence. I believe in myself even more now than ever that I am ready for a world title.  I don’t care if I’m ready or not for Terence Crawford; I want that fight.”

“It was a good fight,” said Maurice Hooker. “Vergil is a great fighter. I take my hat off to him. Everyone in Dallas won. I had been out of the ring for a year and a half. I had to weather the storm of the first few rounds and get my rhythm. Vergil is young and up-and-coming. But there are levels to this. He’s good, but he’s not ready for Terence Crawford.”

Argentine puncher Marcelino Lopez (37-2-1, 21 KOs) of Arribenos, Argentina scored a knockout victory against tough warrior Jairo Lopez (27-12, 18 KOs) of Apodaca, Mexico in a scheduled 10-round welterweight battle. Lopez ended matters at 1:24 of the fifth round.

Cruiserweight prospect Tristan Kalkreuth (8-0, 6 KOs) of Duncanville, Texas scored a first-round knockout win against Dustin Long (4-2-2, 4 KOs) of Johnston City, Tennessee in a scheduled six-rounder. Kalkreuth ended matters at 1:18 of the aforementioned round.

Ortiz Jr. vs Hooker was a 12-round fight for the WBO International Welterweight Championship presented by Golden Boy. The event was sponsored by Hennessy “Never Stop. Never Settle” and “BetOnline – Your Online Sportsbook Experts.” The fight took place on Saturday, March 20 at Dickies Arena in Fort Worth, Texas and was streamed live exclusively on DAZN worldwide, including the U.S. and Mexico.