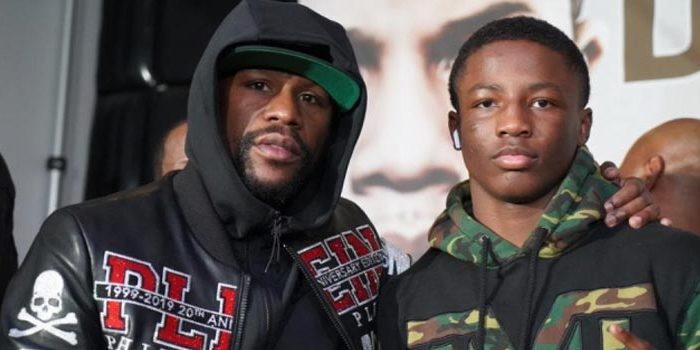 Highly decorated amateur Jalil Hackett out of Washington D.C. takes his talents to Mayweather Promotions and looks to make his professional debut at welterweight under the famed Mayweather banner in 2021.

With an impressive amateur record of 140-19 and a 3.7 GPA to finish high school a year early, Jalil “Major” Hackett is ready to make his debut in the Welterweight division. Trained by his father Bernard, Hackett put himself on Mayweather Promotions’ radar in 2019 after being discovered at Upton Gym while helping 4x World Champion Gervonta Davis prepare for his homecoming fight against Ricardo Nunez in 2019. After both a co-sign from a childhood friend to Mayweather Promotions CEO, Leonard Ellerbe, and a stamp of approval from Coach Calvin and Gervonta Davis, the DC native spent 2019 and 2020 to prepare for his transition to the pros and made it official on March 4, 2021.

“This signing is a culmination of the hard work we’ve put in since he was 5 years old,” said Bernard Hackett. “We dreamed bigger than the Olympics, it was always to turn professional. “I am happy he’s with a black-owned company who understands what he will encounter as a black athlete both in and out the ring.”

This kid has been paving his way as an athlete and a student since day one. Being a boxer and also maintaining a high academic status isn’t common, and it attests to his diligence and dedication to set himself apart in pursuit of an accomplished career. This is only the beginning for this future star! Welcome Jalil!

Hackett was first introduced to the sport of boxing at 5-years-old by his father, an avid boxing fan. Hackett specifically recalls watching legends like Roy Jones Jr., Julio Caesar Chavez, and Marvin Hagler on the screen. There was a reason for that. Bernard hand-picked fighters known for their intense conditioning in the ring and high output, which Jalil is now known for due to his football and track & field conditioning. Hackett recalls sparring 13 rounds with a kid before the opposition jumped out of the ring. During football offseason Hackett would go to the local gym to train, but it wasn’t until he was 8 years old that he fell in love with the sport and began competing seriously. His driving force to compete came after seeing the countless trophies strung at the home of an accomplished world champion. The motivation alone drove Hackett to achieve many titles at the amateur level including becoming a 5x Title tournament champion, Silver Gloves champion, 2x Jr. Olympics champion, to name a few.

Still trained by his father, Bernard, both see more opportunity with Jalil turning professional at this point in his career than continuing in the amateur ring. The talented amateur closely relates his fight style to some of boxings most legendary fighters of our past and present, and looks to make a bold statement as he enters the professional ranks. Be on the lookout for more information and news regarding Hackett’s pro-debut.