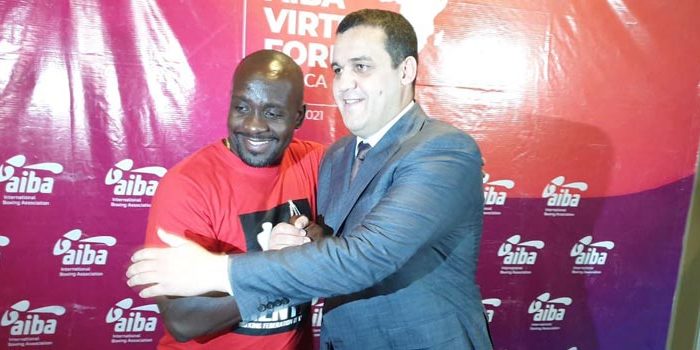 The move by the International Boxing Association (AIBA) to have Kenya as the centre of excellence for boxing in Africa is a game changer in the development of the game in the country.

Boxing Federation of Kenya (BFK) president Anthony “Jamal” Otieno explained that the construction of a boxing academy, that will be fully equipped with a modern gymnasium and the launch of AIBA African tournament this year, will transform the game.

“The beauty of it all is that AIBA will fund the two ventures and what is needed is land that the government has already availed at the Moi International Sports Centre, Kasarani,” said Otieno, when he hosted AIBA President, Umar Kremlev last weekend in Nairobi.

Kremlev, who made history as the first AIBA president to tour Africa, also came along with more goodies for the national team, Hit Squad.

Kremlev, who held training sessions with the team at AV Gymnasium, donated 50 pairs of gloves and an equal number of headgears and pads.

Otieno said AIBA is hoping to accomplish the two ventures within six months.

“This is what we needed like ages ago. We only have three rings which are private in the country, while virtually each club in countries like Morocco has a ring,” said Otieno.

Otieno thanked Kremlev for the efforts he is making to develop the sport on the continent and described his visit as a miracle.

“We have toured the area for the future boxing gym. A blueprint for the structure and the bill of quantities will be prepared by experts and once the plans get approval from our colleagues from AIBA, ” Otieno explained.

“That will kick start everything and there will be no stopping, until all is in place for Kenya to once again challenge big nations in the world of boxing.”

Otieno said since his team took over one-and-half-years ago, they have been working as a team and people now have hopes that boxing wil rise.

“It’s from that perspective that the AIBA president thought it wise to come to Kenya and find out what we are trying to do. I know his dream is to bring the boxing family together and he chose Kenya for his plan,” said Otieno, adding that Kremlev will be back in Nairobi in two months’ time on his way to Uganda.

Otieno said through his slogan “Dondi Mashinani”, they will continue to build the game at the grassroots through the provision of equipment and expertise where possible.

“The number of boxers now attending intermediate [E1] [E2] events have risen to 200 and that is a milestone we would like to upheld post Covid-19. No man can stand alone. I can’t work alone. What is saving us is team work unlike before,” said Otieno.