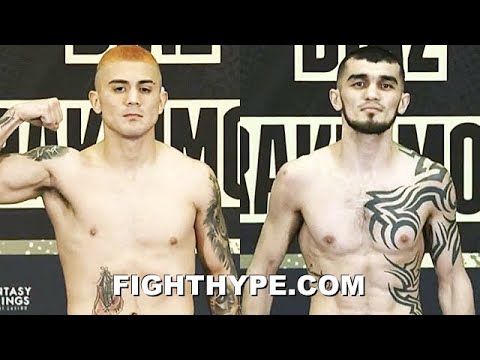 Hopefully JoJo Diaz enjoyed holding his IBF junior lightweight belt at the weigh-in for Saturday’s fight against Shavkatdzhon Rakhimov. It was the last time he’ll have it for a while.

Diaz was stripped of the title after he failed to make weight on Friday. Diaz weighed 133.6 pounds, well over the division’s 130-pound limit. Rakhimov came in at 129.8 pounds.

Diaz will also be fined $100,000 for missing weight, according to ESPN’s Marc Raimondi. That amount, which represents 20% of his purse, will be split evenly between Rakhimov and the California State Athletic Commission.

The bout can still take place because the weight difference between the two men is less than seven pounds, which is in accordance with CSAC bylaws.

This weekend’s bout was scheduled to be Diaz’s first title defense after he won the belt in a victory against Tevin Farmer in January 2020. According to boxrec.com, Diaz has never weighed more than 130 pounds for any of his previous bouts.