Lightweight contender Emmanuel Tagoe has been relieved of his promotional and managerial contract with Baby Jet Promotions.

BoxingAfrica.com obtained a copy of the letter stating that the longtime relationship that existed between Tagoe and Baby Jet Promotions has been abrogated by the latter.

Tagoe, 32, signed a managerial and promotional deal with the boxing syndicate in October 2018 which was due to expire in November this year.

However, in a letter signed by the CEO of Baby Jet Promotions, Asamoah Gyan, and submitted to the Ghana Boxing Authority (GBA) on February 9, the outfit said Tagoe was free to continue his professional career anywhere of his choice.

“The above named promotional and managerial outfit acting per its president Asamoah Gyan wishes to inform you, the Ghana Boxing Authority and all stakeholders that the existing promoter-manager/boxer between the pair is terminated with immediate effect,” parts of the letter said.

“The agreement which was supposed to run from October 2018 to November 2021, has been terminated and we wish to inform you that we have released you to continue your professional boxing career anywhere of your choice.”

Tagoe (32-1, 15 KOs), returned to the ring last August, winning a majority decision over Mason Menard in a 10-round contest in Florida.

That bout was promoted by Eddie Hearn’s Matchroom Promotions but was facilitated by Tagoe’s new US-based promoter, Lou DiBella of DiBella Entertainment whom he signed with in 2018.

The Ghanaian boxer also appointed Peter Kahn as his advisor when he made changes in his team. Kahn, who helped nurture Tagoe’s maternal uncle and Ghana boxing legend, Nana Yaw Konadu’s career during his heyday, is expected to help him fulfill his world championship potential.

It is however unclear whether Tagoe’s decision to team up with DiBella Entertainment and Kahn is the reason for Baby Jet Promotions contract termination.

The former IBO lightweight champion has been on vacation in Ghana since his win over Menard with his camp looking to secure him to a world title shot.

His immediate departure from Baby Jet Promotions leaves the outfit without any signed fighter. However, the boxing syndicate thanked Tagoe for his working relationship and wished him well in the future.

“This takes effect immediately. While thanking you for your working relationship with us during the times past, we also wish you best of luck in your future endeavours and pray that your next promoter-manager will have for you the kind of care and love we had for you.” 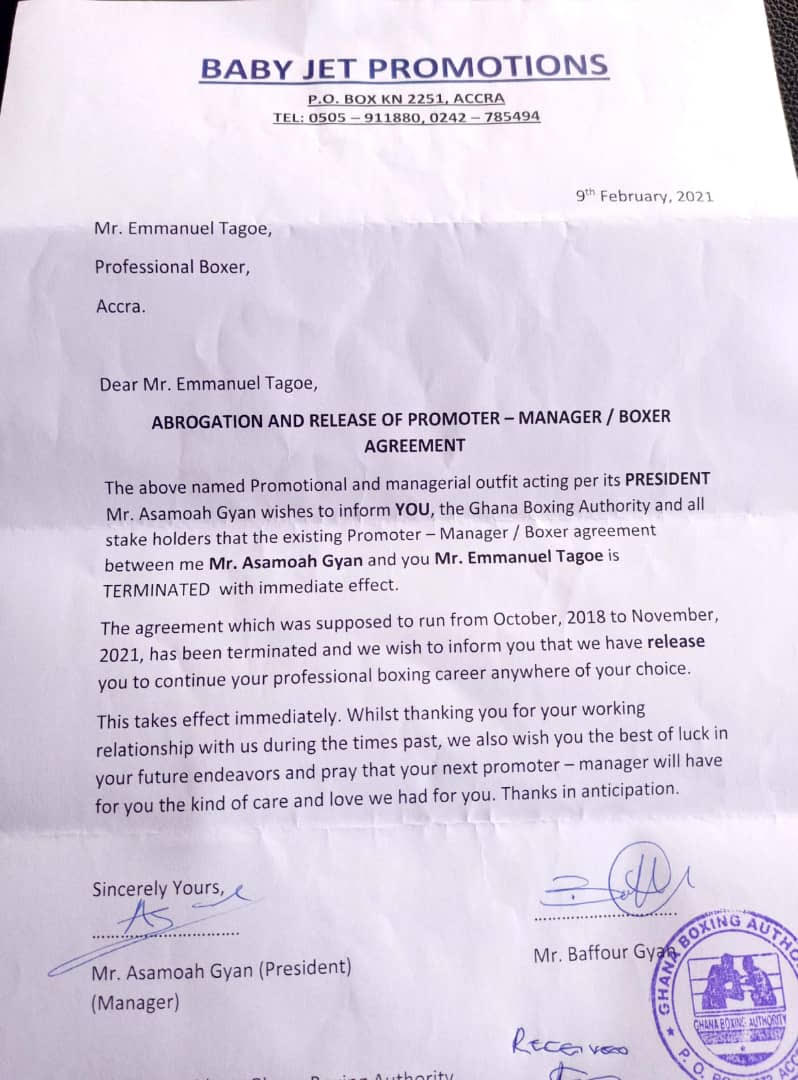