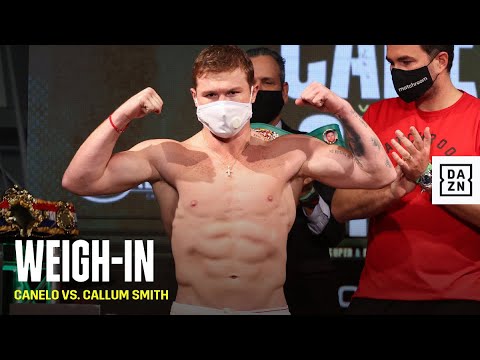 The two main eventers hit the ceiling for their WBA, WBC and The Ring super-middleweight clash in San Antonio, without an ounce to spare.

Saul “Canelo” Alvarez (53-1-2, 36 KOs) will be eligible to challenge Callum Smith for his WBA and The Ring super-middleweight titles after hitting the scales bang on the money at 168 lb for their eagerly anticipated main event, live on DAZN (excluding Mexico) on Saturday Dec. 19.

Undefeated Brit Smith (27-0, 19 KOs) also weighed 168 lb exactly, meaning the duo — who will also be fighting for the vacant WBC version of the title — made the cut without a pound or even an ounce to spare between them.

The showdown, which headlines an Alamodome card in San Antonio, Texas, will close out a challenging 2020 in spectacular fashion.

Smith towered over the smaller Canelo at both the weigh-in and press conference face-offs this week, and both fighters will be able to rehydrate in the 24 hours between measuring up on the scales and stepping into the ring following confirmation that there is no clause in the contract requiring a second weigh-in on the morning of the bout.

On Thursday both champion and challenger admitted agreeing to this match-up came with a large element of risk, which makes it all the more exciting.

The undercard combatants all weighed in prior to the main eventers’ appearance: