Eslih Owusu made his Ghana debut count, scoring a third-round TKO win over veteran Benjamin Ankrah Thursday night in their super welterweight contest at the Seconds Out Gym in Accra.

Owusu (3-0, 1 KO) delivered a sterling performance against Ankrah (17-24, 8 KOs), weakening him with body shots and forcing Ankrah to submit in the middle of the third.

The fight headlined a six-bout on the card which was organized by Fight Ready Promotions.

“He was taking a lot of shots from me and not going down,” Owusu told BoxingAfrica.com. “He is a very tough fighter and I have to give him the credit for that.”

Even so, the American-born Ghanaian’s left hand proved too strong for his opponent.

Owusu spent much of the first studying Ankrah before attacking him in the latter stages of the round as he landed clean shots to the head and body.

Owusu wasted no time in the second, launching a series of power punches at Ankrah. The latter responded with a big right to the chin which nearly sent Owusu down. Instead, he kept his composure, concentrating his attack on Ankrah’s ribcage to close out the frame.

“Ankrah was taking the head punches without any trouble so I told Owusu to focus on the body,” said former WBA world welterweight champion, Ike ‘Bazooka’ Quartey, who was in the corner of the America-based boxer.

That advice from Quartey began paying dividends for the 20-year-old southpaw shortly after the start of the third. A series of shots downstairs made Ankrah abruptly wave the white flag. 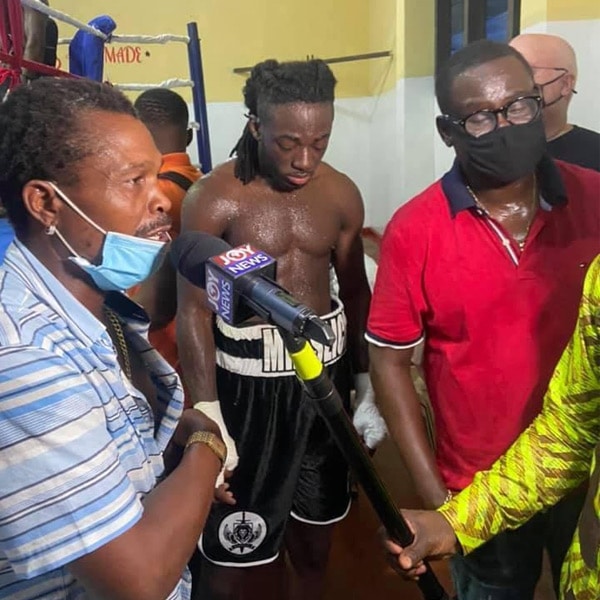 “[Owusu] is a very good fighter and he showed it here. He is just going to get better by the years,” said Owusu trainer Daniel Oko Odamtten to BoxingAfrica.com.

Following his inaugural victory in Ghana, Owusu plans to fight once more in his native country before leaving for the U.S.

“I can’t wait to be fighting more here in Ghana,” Owusu exclaimed. “I really admire the atmosphere and I hope it gives me more wins.”

In a welterweight bout, Moses Lartey lost by KO to Jacob Laryea in the opening round; and Solomon Martey beat Isaac Okine via third-round stoppage.

Richman Ashiley made his ring return following a 10-month with a four-round KO over Enoch Lamptey in lightweight action.