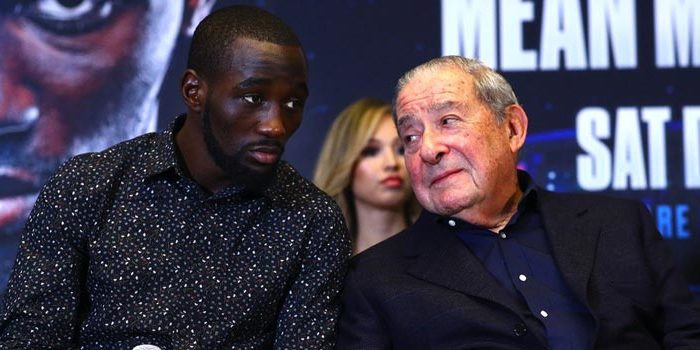 The Top Rank/Terence Crawford relationship took a turn, it seems, when an attorney representing Crawford sent a letter to promoter Bob Arum airing out grievances.

OK, that was probably one in a series of turns; boxing fans know the fighter/promoter relationship can indeed be looked at like a marriage. Ups and downs, and yes, sometimes it takes work, and sometimes the differences are irrevocable. We don’t know today if that is so. But we on the outside are seeing some of the “downs” play out.

Top Rank hasn’t done fully right by Bud, was the message in the lawyer letter, and Arum should have been able to secure a mega-fight for the Nebraska boxer. That declaration was received by Top Rank on Sept. 7, according to a story written by Mike Coppinger for The Athletic.

At that time, Arum and his squad were still looking to figure out specifics on what was next for Crawford, who last fought in Dec. 2019, when he stopped Egigijus Kavaliauskas in New York. Specifics got sorted, Kell Brook got named as the foe for the WBO welterweight champion, and there was going to be a big push to promote the event on Oct. 17, while Vasiliy Lomachenko battled Teofimo Lopez on ESPN. But the push didn’t happen, because Team Crawford didn’t send the contract with Bud’s signature on it until Loma-Lopez fight night.

So the promotion for Crawford-Brook was sort of strange, at times, and that’s allowing for the overall tone which COVID has helped manufacture.

Crawford has admitted that Brook isn’t the one he wanted, but he did allow that the Brit should be a decent test, and is a solid athlete. Arum, right after he saw Naoya Inoue blast out Jason Moloney Oct. 31 on ESPN, proclaimed “The Monster” his new favorite, and didn’t sound mightily enthused about Crawford-Brook when I spoke to him a week before their clash.

We could sort of figure out why when Coppinger’s story broke Nov. 13, and laid out with solid depth how the welterweight and the promotional power are not on that same page.

The matter got smoothed, a bit, when on Saturday night the 33-year-old Crawford did his thing and closed the show on Brook, who has now been stopped by Gennadiy Golovkin, Errol Spence Jr, and Crawford. It was a solid showing, Crawford did what was expected of him with ruthless efficiency. But there was no glowing or crowing after.

The Crawford-Top Rank relationship hasn’t been glued together, not judging by what Crawford said to SiriusXM hosts Ak and Barak during a Wednesday chat. The WBO titlist told the duo he didn’t want to touch “the Bob Arum situation.” They knew it had to be addressed, though.

“It pissed me off,” Crawford admitted. “I am one of the most loyalest, to the core, and for him to go out and say some foolish shit like that, it made me just look at him a whole totally different way.”

So he wasn’t contemplating jumping ship, then?

“Never,” he said. He wasn’t sure where rumors of him leaving Top Rank to go to PBC came from.

In fact, Crawford had been quoted on or before Nov. 11 as saying he thought that his time with Top Rank would be over soon — in a matter of months. But when I asked someone over there about that, they mentioned that his contract said otherwise. He’s actually signed until Oct. 2021, so for him to fight for someone else, that matter would need to be addressed.

During fight week, it came out that Top Rank actually had gotten close to landing Crawford the sort of marquee fight that his fans have been wanting him to get. A clash with Manny Pacquiao, the ex-Top Rank superstar, was nearing finalized terms for the principals, according to Top Rank. Then COVID reared its head, and that gummed up the works. I didn’t see the letter from the Crawford attorney, I don’t know if the lawyer acknowledged that the pandemic had affected the hopes and plans for people the world over; including, perhaps, Crawford and what fight he’d be taking.

OK, could a Pacman fight help make it all better between him and Top Rank?

“Nah. I feel like I can get the Pacquiao fight somewhere else as well, being that Pacquiao is not with Top Rank right now,” he said to the radio hosts. Manny picks who he wants to fight, it’s not up to Bob Arum or anyone else, he said, same as when Floyd made all his own moves.

Crawford told the hosts that he wished Arum had come to him, and not gone public, and defended his rep, maintaining that he does the best numbers of anyone at Top Rank, referring to unnamed “prima donnas.”

Crawford was asked about The Athletic story and the letter, and laid out some counter-claims, sort of, like how Crawford blew off interviews with massive platforms. He was his own enemy, it was implied, because he wasn’t very adept at helping spread the word about his skills. Crawford feels that since Arum is the promoter, that is his job.

Crawford fans are not shy about hitting at Arum for talking badly about his fighter. Of course, rivals to Arum — like Matchroom promoter Eddie Hearn — have taken the opportunity to side with Crawford. It should go without saying that readers must keep in mind who has a dog in the hunt, and what everyone’s motivations and possible impetus for saying certain things might be. Hearn told Ak and Barak the day before that he thought it was disrespectful how Bob went at Bud. The Brit promoter said part of him admires Bob, because of how candid he is. He then took a sneaky snipe at Arum, under the guise of compliment, saying that Arum is so old, he is past the point of caring about being politically correct, and sparing feelings.

“I always took pay cuts,” said Crawford, who is guaranteed $3.5 million per fight on his Top Rank deal, which was extended in 2018. “I took pay cuts for the Viktor Postol fight. … They never really promoted that fight.” He denigrated Top Rank saying that they had to “budget,” and telling him they didn’t think that Crawford-Postol would do well.

The boxer also asserted favoritism. He thought Top Rank did a poor job promoting his April 2019 contest against Amir Khan, didn’t even start pushing it until the week before the bout. He had no posters, ESPN wasn’t pushing it, and that is in contrast to other Top Rank PPVs, which he asserted, “was months in advance” for the promotional hype. Vasiliy Lomachenko would fight on ESPN, he would fight on pay-per-view, and he thought Loma would get more of a push. Loma ads would be on PlayStation and Hulu, and he didn’t see the same for him.

The hosts played some Eddie Hearn tape, and asked when maybe he’d get calls from other promoters. Crawford didn’t get into that, really, but did say, “Top Rank is the company I’m with right now, and in the future who knows what the future may hold.”

“We may have had a disagreement, right now we’re going through some trials and tribulations and we are gonna get it figured out,” Crawford said. “But at the same time, I cannot bash Bob Arum and Top Rank, I cannot do that. Because without them — they gave me the opportunities to accomplish everything I accomplished in my career. So I can’t sit there and bash Bob Arum and Top Rank, when I know, deep down in my heart, he really is a good dude. And he really did do everything that is possible, in his will, to get these fights I was asking for.

“I don’t know what made him come out and say all the negative stuff he said about me, maybe it’s because all these people kept saying that I was leaving him, and he wanted to seem like I was a bad guy. I don’t know, I haven’t had a conversation with him about it.”

They read out an excerpt from what Arum had said about Bud, and how he’d lost money on Crawford’s fights.

“That’s cool, that’s cool, if that’s what he said. If Arum feels that way, then he can release me now,” dared Crawford. “I’m not an asset your company, release me right now. You don’t have to wait for after a Spence fight. Release me now. If I am such a loss or a headache — shiiiiit.”