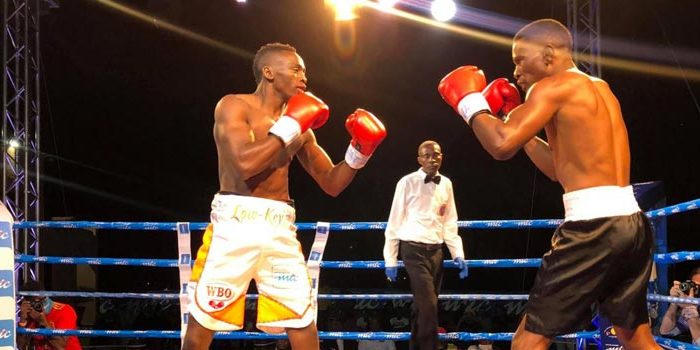 The bout headlined the first boxing card in Windhoek, Namibia since the COVID-19 pandemic. Dubbed “Together as One,” the show was promoted by the MTC Nestor Sunshine Boxing & Fitness Academy at the Windhoek Country Club.

Nakathila is on the verge of a world title shot. Andeleki was simply no match as Nakathila controlled the action in the first behind a heavy jab.

The end came swiftly in the second as Nakathila used his jab again to set up heavy shots to the head and body. The barrage of blows forced the bout’s stoppage, moving Nakathila’s record to 20-1 (16 KOs). The overmatched Andeleki is now 8-7.

Here are how the rest of the fights turned out, as reported by NewEra.com:

In the main supporting bout, Mikka Shonena was stretched to the limit by a stubborn Mendu Kaangundue in a fight that saw great exchanges between the two pugilists but Shonena’s persistence paid off in the end as he earned a unanimous win over Kaangundue after six rounds of blood and sweat during their welterweight fight.

Speaking to New Era Sport on fight night, promoter Nestor Tobias expressed satisfaction with the quality of the fights and the overall performances of all fighters, saying it was encouraging seeing the boxers in action after so many months without fighting.

“I am pleased to have successfully hosted this event, you can see all these boxers have not fought for a long time but the performance was great. It’s a good thing to see most of them back to the ring. Moving forward I’m looking forward to bringing bigger and better fighters to the country to challenge boxers like Nakathila, Shonena and Simon Jnr among others,” said Tobias.