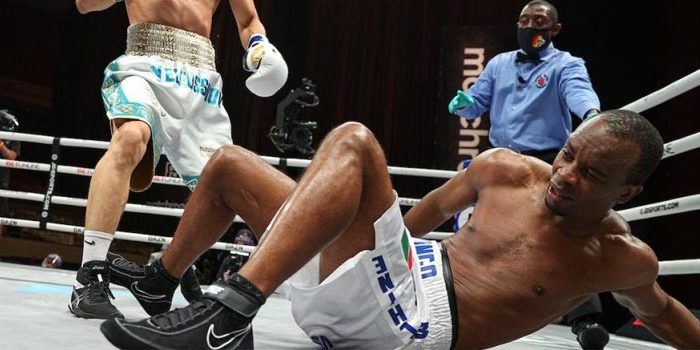 If nothing else, he got rid of Indongo in the same round as Regis Prograis knocked him out and a round earlier than Terence Crawford stopped the ex-junior welterweight champion. Yeleussinov dropped Indongo once apiece in the first and second rounds, and referee Christopher Young halted the action after Indongo got up from the second knockdown.

The official time of the stoppage was 1:24 of the second round in a scheduled 10-round welterweight bout on the Daniel Jacobs-Gabe Rosado undercard at Hard Rock Hotel & Casino in Hollywood, Florida.

Kazakhstan’s Yeleussinov, a 2016 Olympic gold medalist, upped his record to 10-0 and produced his sixth knockout. The 37-year-old Indongo (23-3, 12 KOs), a former IBF/WBA 140-pound champion from Windhoek, Namibia, has lost three of his past four bouts by knockout.

The 29-year-old Yeleussinov sent Indongo to the canvas in the second round with a left hand to the side of his head. Indongo beat Young’s count, but he walked away from Young and clearly should not have continued against the dangerous Yeleussinov.

A short left by Yeleussinov floored Indongo in the first round. The strong southpaw appeared to be on his way to a first-round knockout, but Indongo made it to the end of the opening round.