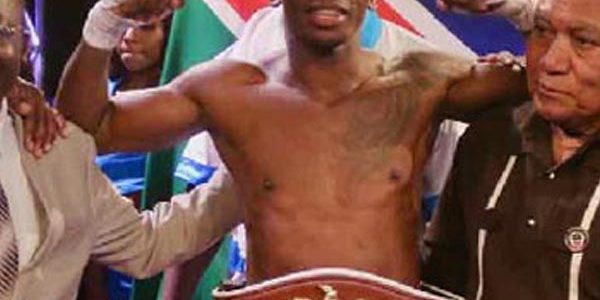 Nakathila, who is ranked third by the WBO in the junior lightweight division globally, takes on Emmanuel ‘Sniper Man’ Amos from Tanzania in the MTC Nestor Sunshine Together Boxing Bonanza Part 2 main event. Nakathila scored an impressive knockout victory over Immanuel Andeleki when returning to the ring after an eight-month Covid-induced lay off.

The reigning WBO Global junior lightweight champion will be making his seventh successive title defence. He boasts an impressive record of 20 wins with 16 coming by KO and only one loss.

His opponent Amos from Dar Es Salaam has 15 wins, four losses and a draw in 20 fights to his name.

The WBO still rated Shonena No.5 two months ago dropped three places due to inactivity as a result of Covid-19 pandemic.

He remains undefeated after 16 fights coming off impressive victories against fellow WBO rated boxer Youli Dong from China and most recently compatriot Ebenestus Kaangundue. Shonena is looking to improve his world ranking by sealing another victory.

Deres is considered a promising prospect and is undefeated after seven fights. The Zimbabwean will look to upstage Shonena.

“Both Nakathila and Shonena are highly ranked title holders and these fights are of paramount importance to them. They both looked very sharp earlier this month and we know they will carry that winning spirit into their title defence fights on the 12th December 2020,” said MTC Nestor Sunshine Promotions promoter Nestor Tobias.

The undercards will be announced closer to the event’s date.

“We are proud to announce the MTC Nestor Sunshine Promotions second event of the year. Our event last month was simply to get our boxers fight ready after a long break. Now they have to defend their WBO titles so that they can maintain and improve their world rankings,” Tobias said.

“We therefore like to invite all boxing fans to watch the fight live on social media and on NBC television since we won’t be able to invite more than 200 guests,” he added.