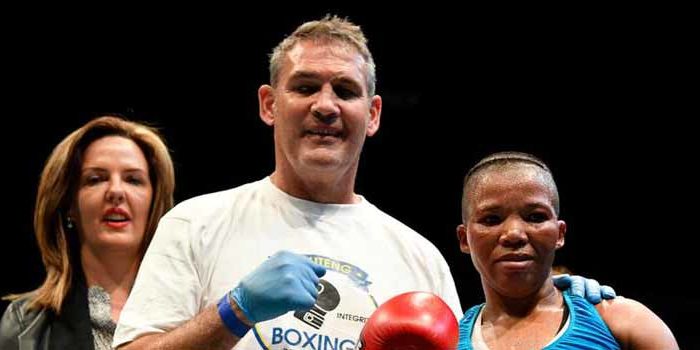 Well-known former fighter and trainer Lionel Godfrey Hunter died at his home in Walkerville on Thursday morning, after a long battle with cancer. He was 58.

Born on April 28, 1962, he fought as a professional from 1983 to 1986 in the middleweight and light heavyweight divisions and compiled a record of 12-5-1; 4 before training fighters from his Booysens gym in Johannesburg.

Lionel made his pro debut on 26 March, 1983, at the Wembley Sports Pavilion in Johannesburg, scoring a first-round s stoppage win over David Khambule

He remained undefeated in his first 10 fights which included victories over future South African champions Sakkie Enslin and Freddie Rafferty.

However, in return fights with Rafferty, he lost on points over eight rounds and on 30 November, 1985, he lost to Sakkie Horn on a 10-round split decision in a clash for the Transvaal light heavyweight title.

In his last fight on, on October 7, 1986, Hunter lost on a sixth-round retirement against South African junior middleweight and a future middleweight champion Gregory Clark at the West Ridge Park Tennis Stadium in Durban. Hunter retired with a cut eye.

As a youngster, Lionel joined the Mayfair YMCA club where he competed as a junior before subsequently moving to the Booysens Club under the guidance of Herby Vermeulen.

As an amateur, he won Transvaal titles, the open Border Championship, and a South African Defence Force title in the middleweight class to finish with a reported amateur record of 79 wins and 20 losses.

After the fight with Gregory Clark in Durban, he decided to call it quits and worked as a full-time bouncer in Rocky Street, Yeoville for about five years.

He then went to work in the auto spares business in Booysens and after 14 years opened his own businesses, Auto Fever and Auto Fever 2 in Selby.

However, Lionel could not stay away from boxing and was a successful trainer of fighters up until his death.

I have known Lionel since the early 1980s, attending many of his fights and have happy memories of the chats with his father at the pre-fight medicals held at the Old Buck Auditorium in Johannesburg.