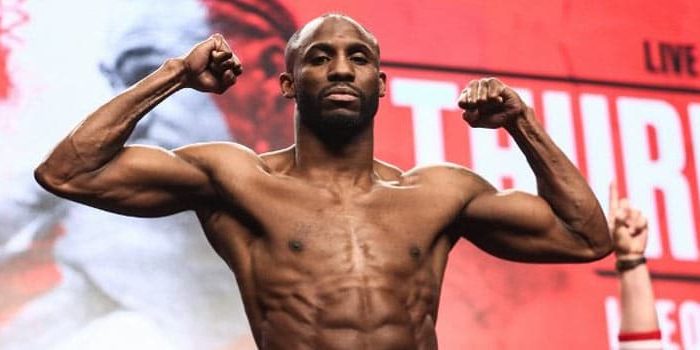 The smile is undeniable. It possesses the kind of megawatt voltage that could light up an empty arena.

Though, behind the contented disposition is where Yordenis Ugas’ real strength lies.

The 2008 Olympic lightweight bronze medalist has forged forward to possibly do what no Cuban boxer has achieved in over half a century: Win a world welterweight belt, when Ugas (25-4, 12 KOs) takes on Abel Ramos (26-3-2, 20 KOs) for the vacant “regular” WBA welterweight title.

The last Cuban to hold a welterweight belt was Hall of Famer Jose Napoles, when the Cuban-born Mexican beat Curtis Cokes for the 147-pound crown on April 18, 1969.

“I know the history,” Ugas said through an interpreter. “It’s been a long road to get here. I believe that I’m one of the top welterweights in the division, and I’m a warrior. I plan to show that on Sunday.

“People are going to see the hunger of a man who wants to become a champion. It’s been my dream since I touched U.S. soil (in 2010). I won at the Olympic level, and now I’m ready to win at the professional level.”

Ugas arrived in Texas from Mexico in 2010. He was actually friends with the late Jose Fernandez, the Miami Marlins pitcher who made three unsuccessful attempts to escape from Cuba, before he tragically died in a boating accident in September 2016.

“54 Milagros,” or, “Miracles,” knows what it was like himself trying to crawl out from under the Castro regime.

“Trying to escape is the story of many Cubans wanting a better life,” Ugas said. “I won’t forget coming over from Mexico and landing in Texas. When the boat reached the shore, I didn’t kneel and kiss the ground, but it was an emotional moment for me.

“I’ve wanted to be free my whole life. I want to be able to provide for my family (back in Cuba) and the only way that it is possible is to succeed here with something I love to do.”

After consecutive losses, vaunted Cuban trainer Ismael Salas was brought in to work with Ugas for the Jamal James fight in August 2016. The Cuban expatriates have been together since.

Salas immediately noticed Ugas’ balance was off. He had a tendency to lean to his left, a habit that originated from over 400 amateur fights for Cuba.

So, Salas broke down Ugas’ biomechanics, and hit restart. They’re 10-1 together.

The 34-year-old Ugas has faced seven undefeated fighters as a pro, going 4-3. With Salas in his corner, Ugas is 3-0 against undefeated fighters. He’s won two straight since losing a 12-round split-decision to Shawn Porter in March 2019.

“A fight that I know I won,” Ugas maintains. “After I lost that fight, I learned that I need to do a little more to win. I really thought I had that fight won. I got comfortable and I thought I was cruising to a victory.

“That was my mentality. At the championship level, you can’t get comfortable. You can’t let that happen. It’s a mistake I won’t make again.”

Ramos arrives here on the wing of a left uppercut; a remarkable victory in which he lost almost every second of every round—except the final seconds of the fight.

Down 88-83 on two scorecards and 84-87 on the other entering the 10th against Bryant Perrella in February, Ramos pulled off the shocker by knocking down Perrella a second time in the round, forcing referee Jack Reiss to wave it over at 2:59.

“I’m going to show the world that I’m on a different level than Ramos,” Ugas stressed. “I know he’s a strong fighter. He’ll come to fight. I watched the Ramos-Perrella fight. I don’t think Ramos should have won that fight.

“I respect Ramos as a fighter, but he shouldn’t be fighting for a championship belt on Sunday.”

Ugas prides himself on his boxing knowledge. He studies past champions. He knows of the legendary Napoles.

Ugas even pulls back over the possibility of being uttered in the same sentence of the Cuban great.

“I do get a little emotional when I think about it, and I know I will when I have my hand raised on Sunday,” he admitted. “The last Cuban welterweight champion was Jose Napoles and that was over 50 years ago.

“Doing this will be something very special for me, considering where I came from to get here. My family had nothing. We lived between walls, in a house with no roof.

“You never forget that.”