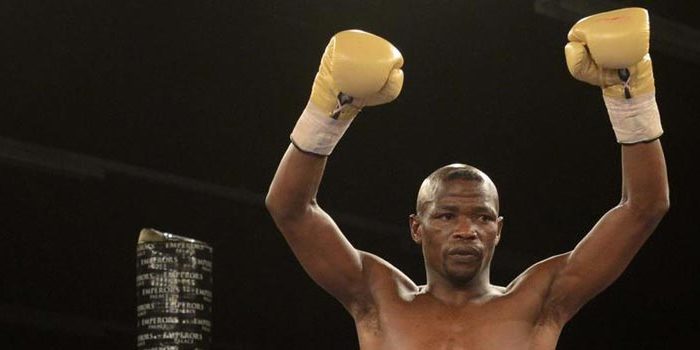 In the most recent copy of the weekly edition of the British Boxing News magazine, South Africa’s Nkosinathi Joyi is listed as the No 7 strawweight in the world.

Boxing News which was first published in 1909 is the most authoritative boxing magazine in the world and has always maintained a high quality of reporting throughout its history.

Joyi, 29-5-1; 19 from Mdantsane in the Eastern Cape is the current IBO strawweight champion and since making his pro debut on 28 April 2002, he has won the Eastern Cape, South African, IBF, WBA interim mini flyweight and WBC International junior flyweight titles in an illustrious career.

The 37-year-old Nkosinathi who fights from the southpaw stance has the nickname of “Mabere” and is one of the favourite fighters appearing at the Orient Theatre in East London when he makes his way into the ring holding a big Teddy Bear.

A sharp southpaw who looks commanding when he lets his punching combinations flow.

His chin lets him down. Rey Loreto for instance brutally exposed that when putting him away.

He defended his world title from future champion Katsunari Takayama in 2012.

In his rematch with Rey Loreto in South Africa, Joyi was floored and knocked out in the first round.

There is little decent footage of him, but nevertheless watching Loreto hammer him into the canvas is mesmerising.

HOW HIGH CAN HE GO?

John Dennen of Boxing News lists the top ten strawweights in the world as below.