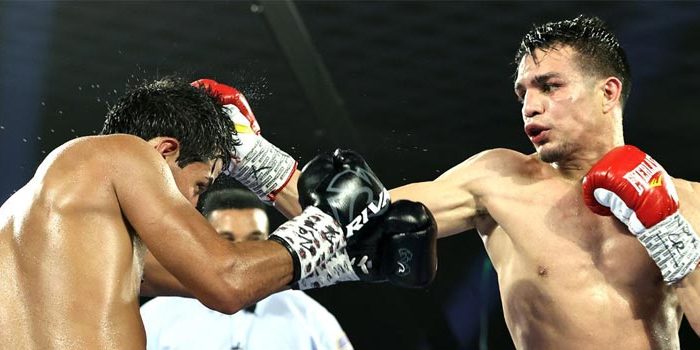 The sharp southpaw out-boxed late replacement Kendo Castaneda and won a unanimous decision in their 10-round welterweight fight in Las Vegas. Castaneda came to fight, but Zepeda comfortably beat him on the scorecards of judges Tim Cheatham (98-92), Dave Moretti (98-92) and Patricia Morse Jarman (97-93) in a main event ESPN aired from MGM Grand Conference Center in Las Vegas.

“I think it was good,” Zepeda told ESPN’s Bernardo Osuna of his performance. “I mean, you never know when a new opponent comes in and nobody knows a lot about him. He has just one loss, and he didn’t get knocked out. Since he hasn’t been [on] the big stages, nobody knows nothing about him. But today I noticed he can hit, get some punches [in]. So, it was a good performance. I could do better. You know, every time when the level goes up, I go up, too.”

San Antonio’s Castaneda, 26, took the toughest fight of his career on barely seven days’ notice. Zepeda was supposed to battle Russia’s Ivan Baranchyk (20-1, 13 KOs), but the former IBF junior welterweight champion withdrew from their 10-rounder after suffering a rib injury while sparring late in June.

Zepeda and Baranchyk were contracted to fight at the junior welterweight limit of 140 pounds. The contract weight was increased to 144 pounds to accommodate Castaneda because he took the fight on such short notice.

Castaneda clearly needed a knockout to win in the final round, but he couldn’t catch Zepeda with a flush shot to change the course of their fight.

A left by Zepeda moved Castaneda into the ropes with two minutes left in the ninth round. Referee Tony Weeks temporarily stopped the action with 1:31 to go in the ninth round so that the tape on Castaneda’s right glove could be fixed.

Zepeda landed various power punches in the final minute of the ninth round.

Zepeda quickly caught Castaneda with a right hook approximately 45 seconds into the fifth round. Castaneda continued trying to attack Zepeda from a southpaw stance, but he had little success in those three minutes.

A left uppercut by Zepeda snapped back Castaneda’s head just before the midway mark of the fourth round. That shot made Castaneda move away from Zepeda.

Zepeda landed several straight left hands in the first half of the opening round. Castaneda briefly switched to a southpaw stance to counteract Zepeda’s success.

His victory Tuesday night keeps Zepeda at least in contention for another title shot.

Zepeda is the WBC’s third-ranked challenger and the WBO’s fourth-rated contender for Jose Ramirez’s 140-pound championships. Ramirez (25-0, 17 KOs) edged Zepeda by majority decision in their 12-round fight for Ramirez’s WBC super lightweight title in February 2019 in Fresno, California, near Ramirez’s hometown of Avenal.

Zepeda told BoxingScene.com before beating Castaneda that he feels he did enough to upset Ramirez and hopes to secure a rematch.

Ramirez is expected to make a mandated defense of his WBC title versus Ukraine’s Viktor Postol (31-2, 12 KOs) on an undetermined date in August. Their fight has been postponed twice due to the COVID-19 pandemic.