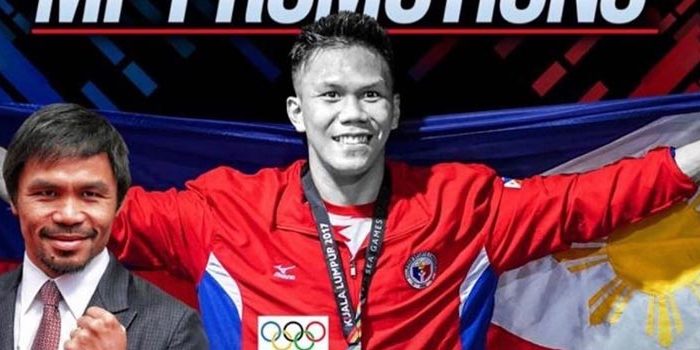 Before he boards the Tokyo Express as a member of the 2021 Philippines Olympic boxing team, amateur middleweight standout and Manny Pacquiao’s newest addition Eumir Felix Marcial has decided to turn professional since professional fighters are now allowed to compete in the Olympics.

“It is an honor to have my idol Senator Manny Pacquiao as my mentor and promoter,” said Marcial.

“I have seen the tremendous opportunities that Senator Pacquiao and MP Promotions President Sean Gibbons have given to so many Filipino Boxers.  I feel working under the MP Promotions banner will give me the best opportunity as I prepare for the Tokyo Olympics and my professional career.  I would like to thank all those who were part of my career from the start, most notably my ABAP family led by president Ricky Vargas, Secretary-General Ed Picson, and my coaches Ronald Chavez, Pat Gaspi and Romeo Brin.

“Also to my lifelong inspirations, my fiancée Princess Galarpe, my siblings, and my mother Carmelita and father Eulalio.  Most of all, thank you to all Filipino sports fans who have shown me endless support from the time I won my first gold medal in 2011 at the AIBA Youth World Championship.  You have inspired me and I pledge to you that I will always give it my all to achieve our goal of winning for the Philippines its first Olympic gold medal next year in Tokyo 2021 and becoming the first middleweight world champion from the Philippines.  A million thanks and ‘Mabuhay!’ to all the Filipino athletes.”

“MP Promotions is thrilled to be selected by Eumir to guide his boxing career,” said Sean Gibbons, president of MP Promotions.

“Senator Pacquiao’s goal at MP Promotions is to give as many Filipino boxers access to the biggest platforms in the U.S. and around the world, and create the best opportunities to succeed in boxing like the ones Manny has enjoyed over the last 25 years.  We have followed Eumir through the amateurs and he is special.  His dedication to boxing, his family, and the country of the Philippines is very strong.  MP Promotions is proud to be guiding its first Olympian.  We will make sure his journey to the 2021 Olympics in Tokyo is a smooth one as we help Eumir achieve his dual dream of winning Olympic gold and a professional world title for his father and the Philippines.”

Before the pandemic shut the world down, Marcial had been on a roll.  He punched his ticket for the 2021 Olympics in March by winning all four of his bouts in the Asia-Oceania Olympic Qualifying tournament in Amman, Jordan.

Marcial was the top seed in his division.  Last December, he captured the gold at the 30th Southeast Asian Games as well as the silver medal in last year’s World Boxing Championships.  His illustrious résumé also includes being a three-time SEA games champion.