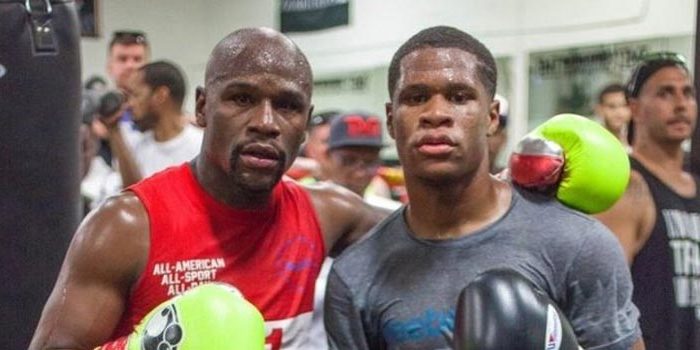 Footage of Floyd Mayweather training Devin Haney has been watched by millions of people on social media platforms over the past week.

Mayweather motivates Haney in some segments by providing positive reinforcement as he hits Mayweather’s mitts. In other videos, Mayweather instructs Haney how to throw textbook jabs and how to implement the defensive techniques Mayweather mastered.

Haney has enjoyed working with the retired legend, but they haven’t discussed the possibility of Mayweather permanently becoming his head trainer. Bill Haney, Devin’s father and manager, has been his head trainer since the 21-year-old champion made his pro debut in December 2015.

“Me and Floyd have, you know, we have talked on numerous occasions about him, you know, working with me,” Devin Haney said during an interview with IFL TV that was posted Saturday to its YouTube channel. “As you saw that, you know, it’s plenty of videos of him working [with] me in the gym, showing me different tips. So, we finally got in a real training session and it went well. As of now, we haven’t spoke on anything long-term. But, you know, whenever Floyd can give me tips and work with me, he always does. So, you know, I have to thank him for that.”

Haney spent plenty of time in Mayweather’s gym while growing up in Las Vegas. He previously has worked with Floyd Mayweather Sr., and the younger Mayweather’s uncles, the late Roger Mayweather and Jeff Mayweather. Working with the most accomplished member of that family for just a few days has helped Haney immensely.

“I mean, so much,” Haney said regarding what he has learned from the undefeated five-division champion. “Floyd, he knows so much of the game. Of course, he has accomplished so much. He’s been in the game for, you know, so long. He became world champion the year that I was born [1998]. So, you know, it’s so much that he can teach me and I’m learning so much. … I’m very thankful for this. You know, it’s still unbelievable to me.”

Haney (24-0, 15 KOs), who had surgery on his right shoulder in December, is expected to make a voluntary defense of his WBC 135-pound championship against an undetermined opponent in his next fight. If Haney wins that bout, he then would have to make a mandated defense against the winner between the Dominican Republic’s Javier Fortuna (35-2-1, 24 KOs, 1 NC), the WBC’s top-ranked lightweight contender, and British southpaw Luke Campbell (20-3, 16 KOs), who is ranked second by the WBC.