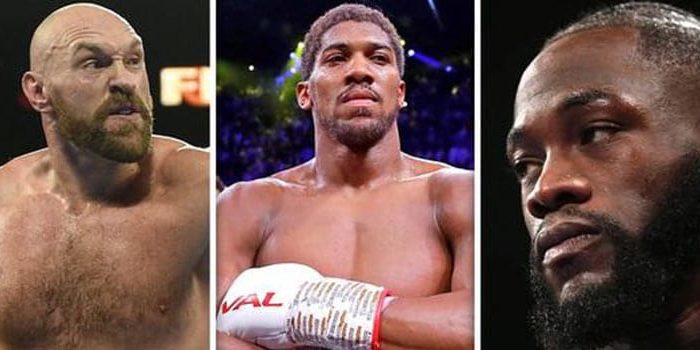 Tyson Fury has declared that Deontay Wilder is a more dangerous opponent than Anthony Joshua and labelled his fellow Brit a ‘big cuddly baby.’

The ‘Gypsy King’ knocked out America’s WBC champion to take his title in February and is now being linked with an undisputed showdown against AJ.

Tentative talks have begun regarding the location of the potential Fury vs Joshua bout, however it is far more likely a trilogy fight with Wilder will come first as he has activated his rematch clause and is unlikely to step aside.

When asked whether Wilder is the more dangerous of the pair, Fury told ESPN: “100 per cent, Joshua’s not dangerous, at all. He’s like a big cuddly baby.

“Why would I be a believer when he got knocked spark out by Andy Ruiz? A last-minute replacement opponent.

“Turned up 300lbs or whatever, didn’t train, and Anthony Joshua couldn’t do any good with him in the rematch.

Anthony Joshua is the unified WBA, IBF & WBO heavyweight champion of the world

Anthony Joshua is the unified WBA, IBF & WBO heavyweight champion of the world

“He doesn’t have anything, he couldn’t hold a candle to the ‘Gypsy King.’

“They’ve all fallen by the wayside, the fellow that hasn’t gotten beat, has knocked them out.

“I’m the only one. Me. The ‘Gypsy King’. Unbeatable, the untouchable, unbreakable champion.”