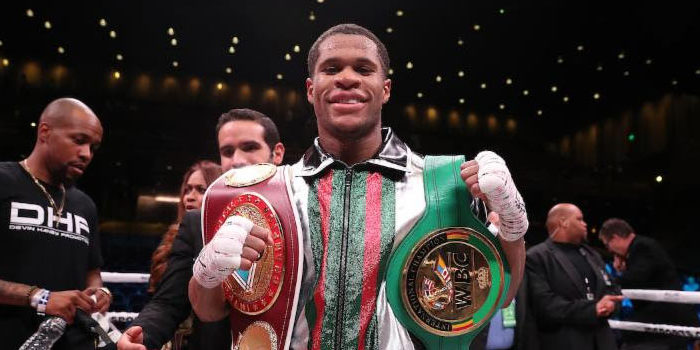 A rough week for Devin Haney just became much brighter.

The 21-year old lightweight was successful in his filed appeal to have his World Boxing Council (WBC) title reign restored. The news was confirmed by the sanctioning body, whose Board of Governors voted in favor to reinstate Haney as its champion.

“The WBC Rules & Regulations give the WBC the absolute discretion to designate Champions and Mandatory Contenders and also to withdraw any such designation,” noted the WBC statement on Wednesday announcing the ruling.  “Specifically Rule 3.16, provides as follows:

“3.16 Withdrawal or Suspension of Recognition. The privilege of competing for a WBC designation or title, goodwill, trademarks, and other intellectual property associated with any WBC championship or right, the WBC belts, or WBC-sanctioned bout, and the WBC titles and designations, are each owned exclusively by the WBC. Therefore, the WBC may suspend or withdraw recognition of a boxer as a WBC champion, challenger, or contender, as it may determine in its sole discretion, for any reason justifying suspension or withdrawal, including but not limited to violation of the WBC Constitution or these Rules & Regulations, holding the title of or fighting for another organization without the approval or sanction of the WBC, or conviction and/or imprisonment for a crime involving moral turpitude or any other serious moral offense.”

Haney (24-0, 15KOs) was declared “Champion in Recess” on December 13, due to his physical inability to honor a mandatory title defense versus Dominican Republic’s Javier Fortuna (35-2-1, 24KOs). An injury sustained in a 12-round win over Alfredo Santiago last November forced the Las Vegas-based boxer to undergo shoulder surgery which was projected to leave him out of the ring until May.

The development provided an abrupt end to negotiations which were ordered in mid-November, though reaching a point where the bout was destined to head to a purse bid.  As such, the WBC named Haney its Champion in Recess which would entitle him to fight for his old belt the moment he was able to resume his career.

Meanwhile, Fortuna was ordered to face England’s Luke Campbell for the vacant title, with their bout to have taken place on April 17 at MGM National Harbor in Oxon Hill, Maryland. The show was canceled due to CDC (Center for Disease Control) regulations in conjunction with the ongoing global coronavirus disease (COVID-19) pandemic.

Its produced downtime has left Haney on the short list of boxers to be able to leverage the situation to his advantage.

An appeal was filed by Haney’s team on March 23, requesting to be reinstated since he was able to honor his mandatory given the absence of a vacant title fight taking place. Medical records provided to the WBC on April 8 were reviewed and deemed as proof enough to send the belt back to its original owner.

Haney will be granted an optional title defense for his ring return, which again works in his favor given the robust talent existing at the division’s top level. From there, he will be required to face the winner of the rescheduled clash between Fortuna and Campbell which—should the matchup still take place—will now be for the WBC interim title.

The news comes on the heels of his serving as the focal point of a hot button topic. The lightweight came under fire for his declaration that he would “never let a white boy beat me” in response to how he’d envision a fight playing out with unified lightweight titlist Vasilily Lomachenko.

Haney had long been in pursuit of such a fight, only for the opportunity removed after the WBC named Ukraine’s Lomachenko (14-1, 10KOs) its “Franchise” champion two months after having won the “Regular” title in a 12-round victory over Campbell last August. Haney won the interim title two weeks after Lomachenko-Campbell with a 4th round stoppage of previously unbeaten Zaur Abdullaev, only to be upgraded to full titlist six weeks later without having to actually fight for the belt.

Thanks to the ruling by the WBC absolving him of a mandatory title defense for his first fight back, Haney should now have the freedom to pursue the big fight of his choosing.