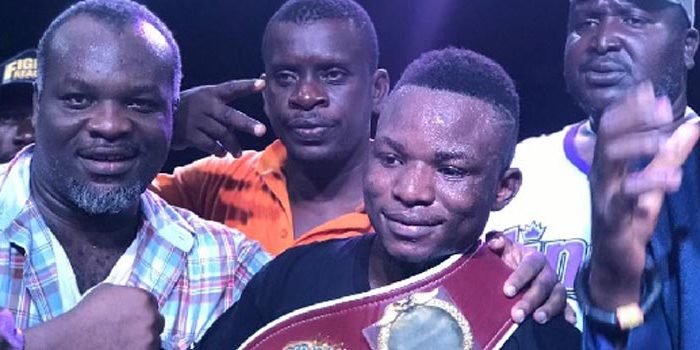 Ghana’s Mohammed, 12-0 (11 KOs), is out to fight the best in the division, which means facing WBO World Super Bantamweight Champion Emanuel Navarrete. The 24-year-old boxer is closing in on that shot as he is currently rated seventh by the WBO following an explosive fourth-round KO over Benin’s John Amuzu last January.

Even so, a world title fight may have to wait as the current coronavirus pandemic has halted all boxing events worldwide and led to a lockdown within the Greater Accra and Ashanti regions of Ghana.

Nevertheless, Mohammed is keeping busy, training alone to stay in shape while awaiting a ring return.

Once boxing resumes, Mohammed wants a shot at Mexico’s Navarrete, who dethroned Ghana’s Isaac Dogboe for the title in December 2018. A win over Navarrete would mean exacting revenge for Mohammed’s compatriot Dogboe, who suffered successive losses to Navarrete in decisive fashion.

In an interview with BoxingAfrica.com, Mohammed refuted claims that he isn’t ready for a shot at the hard-hitting Navarrete, who has defended his title five times and stopped all five opponents, including a TKO win over Dogboe in their rematch.

“The time is now to prove a point to the world because this is boxing and you need to take your chances when they arrive and I am ready to take on the world,” Mohammed told BoxingAfrica.com.

“I have been calling out Navarrete because I believe the time is ripe for me to become a world champion. The only way I can be the best is to fight and beat the best and I am ready to achieve that.”

It’s been a long journey for Mohammed, but one that has paid off since he opted to pursue a career in the Sweet Science over one in football.

“I grew up at Kokomlemle in Accra where I usually watch fighters train at the Fit Square Gym but I was a footballer at the time and never thought of swapping,” Mohammed recalled.

“I remember receiving 50 pesewas for training as a boxer, unlike when I play football so it motivated me to always be at the gym and that was how it all started.”

The rest is history. He turned pro in April 2017 and immediately turned heads with his fight-changing power.

In July 2018, Mohammed took a major step up in class when he faced the experienced Raymond Commey. He passed his toughest test with ease, stopping Commey in two rounds to set up an October 2018 bout versus WBO Africa super bantamweight titlist Isaac Sackey.

Mohammed dropped Sackey in the third but the defending champion rose quickly and appeared ready to fight when referee Adorn Bertin of Benin abruptly stopped the fight, awarding Mohammed with a TKO victory.

Bertin’s controversial decision sparked a free for all and total chaos inside Accra’s Bukom Boxing Arena as Sackey’s camp and his supporters charged into the ring to attack the referee for what they believed was a bad call.

Team Sackey filed a protest with the WBO, but the sanctioning body ruled the stoppage to be legitimate, declaring Mohammed to be the winner and handing him their Africa 122-pound strap.

Mohammed has won three in a row since the melee, including the victory over Amuzu, which netted him the WBO Global super bantam belt. John Manfo, his manager and promoter, says his fighter will defend the belt if they are unable to land a world title shot by year-end.

“The focus is a world championship bout with Navarrete but there is a possibility of Wasiru making his second title defense if we are not able to get the title shot,” Manfo told BoxingAfrica.com.

“We are looking at building Wasiru’s capacity towards the world title and making his second title defense would provide him that, so we are open for negotiations when the need arises.”