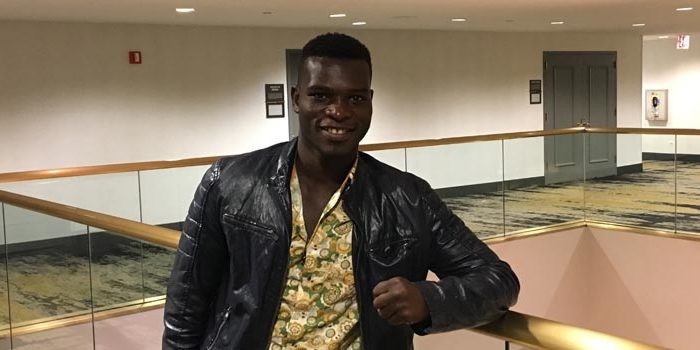 Commey, who lives in New York, has been in his native Ghana for the past four months, spending time with his family. The 33-year-old slugger has been following the precautionary measures of Ghana’s Ministry of Health (MOH) to combat the spread of the coronavirus.

Yet boxing isn’t far from his mind. Despite the postponement of events, and travel restrictions within the country, the former champion is busy training at Accra’s Bukom Boxing Arena, preparing for his next fight.

His last one is already in the rearview mirror. Last December, Commey (29-3, 26 KOs) suffered a stunning second-round TKO loss to the undefeated Teofimo Lopez at Madison Square Garden in New York. The fight ended his eight-month reign as champion, which began in February 2019 with a TKO win over Isa Chaniev.

Commey has turned that loss into a lesson.

“In terms of training I was 100% percent fit,” he recalled. “We were all going for it but unfortunately I was caught first and should have exercised a little patience.

“This is boxing and things happen so I have moved on from the defeat and I’m preparing myself for the next fight.”

Commey is looking ahead, surveying the 135-pound landscape in search of another title opportunity.

“I have a bright chance of becoming a two-time world champion and I can assure you that it is going to be pretty soon,” Commey told BoxingAfrica.com.

“I want to continue in the lightweight division for now because my body responds well [to the weight]. I am keen on fighting anyone ahead of me in order to get the chance to conquer the world again.”

Commey wants the opportunity to avenge his loss to Lopez but the Honduran-American is set to unify versus revered WBA/WBC/WBO World Lightweight Champion Vasiliy Lomachenko at a later date this year.

Commey expects the more experienced Lomachenko to pull it off.

“I’m going for Lomachenko because I think he is a technically better boxer than Lopez but that doesn’t mean I’m disrespecting him,” Commey explained.

However, should Lopez upsets the pound-for-entrant, a rematch versus Commey could occur if Top Rank Promotions, who have Commey, Lopez and Lomachenko all under contract, sign off on it.

“We are ready for a rematch with Lopez if only they are willing to make it happen by offering us the fight,” said Michael Amoo-Bediako, Commey’s manager and managing director of Streetwise Management.

“If it doesn’t happen then we have to look elsewhere to make sure Commey becomes a two-time champion in the division.”

“I believe the division is still open with not too many fighters ahead of me, despite the loss to Lopez. That makes my chances brighter.”