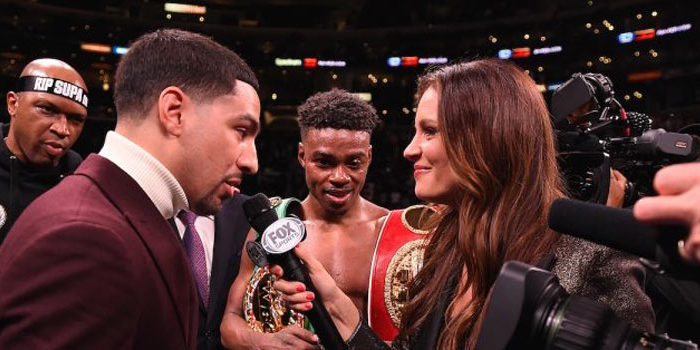 Whenever this current health crisis ends, Danny Garcia is looking forward to the restoration of his stock portfolio and his welterweight championship dreams.

The former two-division titlist is doing his best to remain optimistic on both fronts while quarantined with his family in the wake of the ongoing coronavirus disease (COVID-19) pandemic. His latest form of entertainment came in joining his longtime girlfriend, Erica Mendez on an Instagram Live video where they discussed a variety of topics—including his own career which he insists will resume July, assuming the rest of the sport is back to its normal schedule by then.

Philadelphia’s Garcia (36-2, 21 KOs) revealed that plans remain on course to face unbeaten and unified welterweight titlist Errol Spence (26-0, 21 KOs), although whether that coincides with his targeted summertime ring return remains to be seen. A fight between Spence and Desoto, Texas-based Spence was due to take place earlier this year but postponed for reasons unrelated to COVID-19. The two were due to collide in January, only for Spence to sustain injuries from a single car crash last October.

From there came the backup plan of keeping Garcia active, keeping that same January date as he scored a 12-round decision win over Ivan Redkach.

The idea from there was to revisit the brainstorm of Garcia challenging Spence in an attempt to become a two-time welterweight titlist. That was before the boxing schedule would—and continues to—take a hit, along with every other sporting event and major business around the world.

For now, the targeted timeframe for Garcia to return to the ring is this summer whether versus Spence or in another fight leading to that event. Working in his favor is his current status with the World Boxing Council (WBC), one of two titles in Spence’s possession.

Mauricio Sulaiman, president of the WBC reminded the boxing world of Garcia’s place as mandatory challenger to the sanctioning body’s welterweight title. Spence will already be due to face the winner of the International Boxing Federation (IBF) interim welterweight title fight between Kudratillo Abdukhakarov and Sergey Lipinets, which won’t leave him for much room to face anyone else but Garcia once he’s ready to return to the ring.