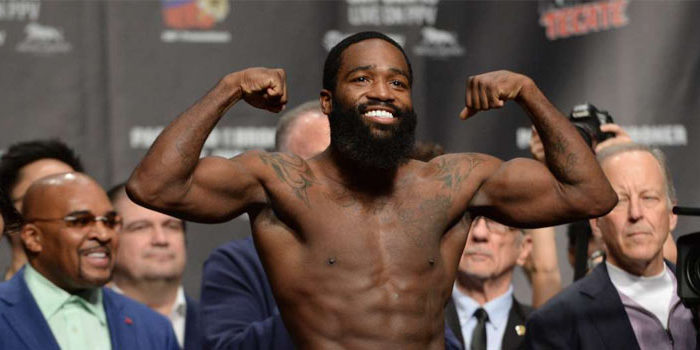 Adrien Broner believes that the social distancing doldrums of the coronavirus pandemic was designed for him to fail.

“This sh-t is starting to get real repetitious, man. That ain’t good,” Broner said on Instagram Live, chatting while driving in his car, and later while in the kitchen. “Once I start getting in this mode, it ain’t good for you, man. I know a lot of people are banking on me to stay in the club, keep partying, and f–k around.

“But when I get in this mode, it isn’t good for you because you got to think. At any given time that I get back and say ‘f–k everything, Instagram, Facebook, all social media’ and focus 120% on boxing, it’s over. And then not only that, just think if I go to my regular weight [130 or 135?].”

The last time Broner (33-4-1, 24 KOs) was in a boxing ring was last January against Manny Pacquiao in a one-sided beating as a welterweight. The former four-division champion Broner has not made the 135-pound limit since 2013.

“The Problem,” who’s been arrested twice already this year, still has his sights set on returning to the ring, as he recently called out Devin Haney and told Matchroom Boxing head Eddie Hearn to front the money for a fight to take place at 135.

The 30-year-old Cincinnati-based slugger has had yearslong troubles with the scale, and the odds would not be in his favor to successfully make the lightweight limit.

Broner then went on to recall some of his other shortcomings.

“A lot of people don’t know. I wouldn’t say I was forced, but I was given some ultimatums that I could not turn down,” he said. “At that time, I was young, and they were throwing all this money in my face. But there are two sides. Let’s say I would have won. Then we’d be talking differently today.

“But if I had the chance to do it all again, I would do it all the same way because all the knowledge I got, everything I learned, and the way my career went. I’m happy it went the way it went.

“It could have been way worse, and I’m still learning now. I still have way more to learn, but like I said, I wouldn’t change anything.”