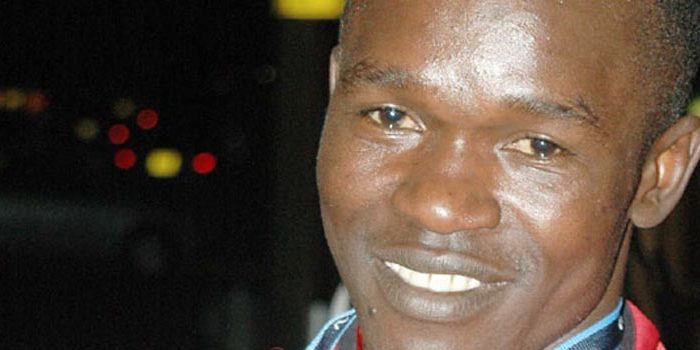 There is no relenting for Olympian Nick “Commander” Okoth in his preparations for the 2020 Tokyo Olympic Games.

In what has been described by his coach Benjamin Musa as “active rest,” Okoth, a Kenya Defence Forces (KDF) corporal, has been shaping up at St Teresa’s Catholic Church Gymnasium.

“I have faith this coronavirus will be contained and I don’t want to be caught off guard come the Olympic Games,” says Okoth, who is the sole male Kenyan boxer to have qualified for the Tokyo Olympic Summer Games.

“The bible says in Matthew 24:35 that heaven and earth will pass but my words will never pass away,” says Okoth, who one of the newest fathers in town, having also turned 37 on March 3. The only other Kenyan to have qualified for the Olympics is a Christine Ong’are.

Okoth said he had taken a one-and-half weeks’ break after returning home from the Africa qualifiers for the Olympics that took place from February 20 to 29 in Dakar, Senegal.

He lost in the final of his featherweight contest to Everisto Mulenga from Zambia, but had already qualified for the Olympics by virtue of having reached the final.

Since his KDF team broke from camp owing to the government’s directive against various events in an effort to curb the spread of the coronavirus, Okoth has been training under the watchful eye of Musa daily, except for weekends, at St Teresa’s Catholic Church.

Okoth will be making his second appearance at the Summer Olympics having made his debut at the 2008 Beijing Games.

“Musa is the best coach one can think about. He took me to the 2008 Beijing Olympics and now Tokyo.

“He understands my needs and style of boxing… and I am indebted,” said Okoth in an end-of-week interview last week.

“We are taking serious precautions as far as Covid-19 is concerned, but we leave everything to God,” said Okoth.

Okoth said Musa told him to go and “die” in the ring in Dakar since this would perhaps be his last chance to compete at the Olympics, hence he had to give it all.

“I am doing a lot of road work and exercises to keep my body flexible. My fitness is my secret,” said Okoth, who has name his week-old daughter after Musa’s mother and his own mother.

“She is Leisa-Jane Okong’o. Leisa is Musa’s mother while Jane is my mother,” said Okoth, adding that he wanted to surprise Musa by naming his baby after him if it was a boy.

“It turned out to be girl and we thank God for that,”Okoth says. Okoth is now the father of three, the two others being 17-year-old son Owen and 10-year-old daughter Delhi.

“I named my daughter Delhi after my bronze medal exploits at the 2010 Delhi Commonwealth Games in Bantamweight,” said Okoth adding that his wife Rachel Ouko also played a key role in his qualification for the Olympics after 12 years hiatus.

“She told me to go for gold since the sacrifices I had made wouldn’t go in vain,” said Okoth.

“I was worried deep inside how she would react all through the stages… you know she was expectant.

“I had no short-cut but to qualify for the Olympics.”

Okoth sighed with relief after he won the semi-final duel against Isaac Masembe from Uganda.

“Okoth is the easier boxer to handle, he knows what is required on him. I believe he will perform well at the Tokyo Olympics,” said Musa.